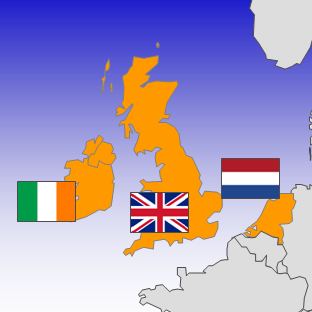 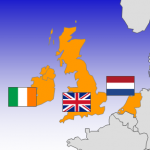 On Thursday the 22nd of May citizens in the Netherlands and the UK voted to elect national delegates to the next European Parliament. Irish citizens voted on the following day, Friday the 23rd. In the UK the electoral system in use is a closed list system with regional districts. In the Netherlands the system is ordered (belonging to the group of open list systems) and there is one constituency for the whole country to choose the 26 MEPs (one more than in 2009). Irish voters elected their 11 MEPs (one less than in 2009) through PR-STV,[1] a proportional system that allows voters to give ordered preferences to each and every candidate in the list. PRSTV is also used Northern Ireland, where 3 of the 73 UK representatives are elected. The possibility of given preferences to every candidate and, the consequent transfer of votes results in a slow tally process that lasts for days after the polls close.

In the Netherlands turnout was 37% and in the UK 36%, while Ireland was among the few member states where turnout was above 50% (51.6%). Turnout figures are important to a fuller understanding of the elections’ results. The Netherlands and the UK are two key arenas to sense the strength of Eurosceptic right wing parties. In the former the PVV of the Europhobic Geert Wilders gained popularity, and votes, over the past few years. Wilders calls for a limit on the number of immigrants and the defence of national culture against the alleged threats of multiculturalism. In the UK, Nigel Farage’s UK Independence Party (UKIP) voices a similar position, but Farage’s discourse focuses on the economic implications of immigration far more than on the cultural ones. Many observers see these two parties as a signal of a growing anti-EU movement that comprises also the French Front National. However, such a movement crucially lacks a transnational dimension and appears deeply fragmented. Moreover the electoral fortunes of the UKIP and the PVV were very different last week.

We begin analyzing the results of the 2014 elections by looking at what happened in the Netherlands. The PVV lost 3.5 percentage points from the EP elections of 2009 [-2 points when compared to the 2012 general elections] but managed to secure 4 MEPs, as many as in 2009.

With regard to government parties – a coalition formed by Labourists (PvDA) and Liberals (VVD) – both the PvDA and the VVD maintain the same number of MEPs, 3 each, than in the past European Parliament. The Christian Democrats lose 5 percentage points but keep their 5 seats, while the centrist D66 gains 1 MEPs sending to Strasbourg 4 representatives. On the left side of the political spectrum, the Green Party and the Socialist Party win 2 seats each; while the former loses 2 percentage points the latter gains 2.5 points. The remaining 3 seats go to the Animals Party (1) and the Christian Union (2). Table 1 below shows very little change from 2009 and that the most remarkable element of this election remains the low level of turnout. Dutch commentators point at a low intensity campaign as one of the key determinants of such low turnout.

Voters’ apathy has also characterized the election in the EU. However, unlike in the Dutch case, quite a lot has changed in the UK when we look at the electoral results (Table 2). The government coalition – Conservatives and Liberal Democrats – lost 17 seats (-10 for the Liberal Democrats and -7 for the Conservatives). Liberal Democrats suffer a dramatic loss in terms of vote share, losing half of the votes when we compare to the outcomes of the 2009 election. The Labour party gains 10 percentage points and registers a +7 in terms of elected representatives. All in all, the UKIP emerges as the clear winner of the election and Farage, commenting the results, claimed that his party’s performance represents an earthquake in British politics. The UKIP wins 4 million votes, 27% of vote share and sends 24 Eurosceptic MEPs to the new European Parliament. Clearly, UKIP emerges from the election as a key domestic and European actor.

Importantly, the notorious British Euroscepticism seems to be stronger than ever. Over 50% of voters gave their preferences to parties that want ‘less Europe’ and promise to British voters an in/out referendum. Farage pushes for a referendum to be held before the 2015 general election and the conservative Prime Minister David Cameron promised to hold a referendum in 2017[2] – given that his party gets to lead a government after the 2015 election, which at the moment seems unlikely.

With regard to Ireland, where voters on May 23rd also casted a vote for local elections, results led quickly to the resignation as party leader of the labourist Eamon Gilmore, who is also deputy Prime Minister (Tánaiste). The Labour Party is in government with Fine Gael since March 2011. Both parties performed poorly: Fine Gael, the party of Taoiseach (Prime Minister) Enda Kenny lost 7 percentage points while the Labour party lost 9 points and, notably, did not secure any MEP. Gerry Adams’s Sinn Féin makes a large gain (+8 percentage points) and secures 3 seats. Adams – a key player in designing the Good Friday Agreement of 1998, that brought peace to Northern Ireland after decades of violence – has been at the centre of media attention in the past few weeks. The Northern Ireland police recently questioned him – and then released him with no charges – for several days, in relation to an execution perpetrated by the IRA over 40 years ago. Despite such a controversial event, Sinn Féin’s campaign succeeded in attracting a large number of votes and gaining a strong position in the Irish political system. The other key element of this election regards the electoral performance of Fianna Fáil,[3] the most successful party in the history of the Republic of Ireland. Fianna Fáil led coalition governments between 1997 and 2011, when suffered a major electoral defeat (-24 percentage points) at the February 2011 general election.[4] The management of the economic crisis by Fianna Fáil’s ministers and Taoiseach was both questionable and unpopular, but the party seems to have now remerged as a key actors. At the local election of May 23rd Fianna Fáil won the largest share of vote despite losing two MEPs.

Finally, we note the presence, and success, of a large number of independent candidates. This defining trait of Irish politics[5] appears even more prominent at the 2014 EP election, where out of 11 newly elected MEPs three of them do not belong to any party.

In summary, the electoral results of the Netherlands, the UK and Ireland tell three different stories: in the Netherlands the parties in government did not suffer any significant loss with respect to the 2009 European elections, on the contrary the sitting governments of Ireland and the UK were severely punished by voters. Geert Wilders did not manage to secure large support, while in the UK Nigel Farage succeeded in bringing anti-EU concerns at the top of the political agenda. Turnout was low, in line with the 2009 elections, in both the UK and the Netherlands; on the contrary, turnout in the Republic of Ireland was 8 percentage points higher than the European average, while lower than in 2009 (-7 points). These three different stories confirm the second order nature of EP elections,[6] with domestic considerations outweighing European ones.

[3] Fianna Fáil is also known as the Republican Party for its opposition to the 1921 Treaty signed with Great Britain. The treaty while formally guaranteed independence to the Republic of Ireland established British control over the six counties of Northern Ireland. Republican therefore connotes the position of those who support the idea of a united Ireland completely independent from British rule (Fianna Fáil and Sinn Féin) versus those who accepted the treaty (Fine Gael). Over the years Fianna Fáil has deemphasized the Northern Ireland issue and established itself as centrist party.