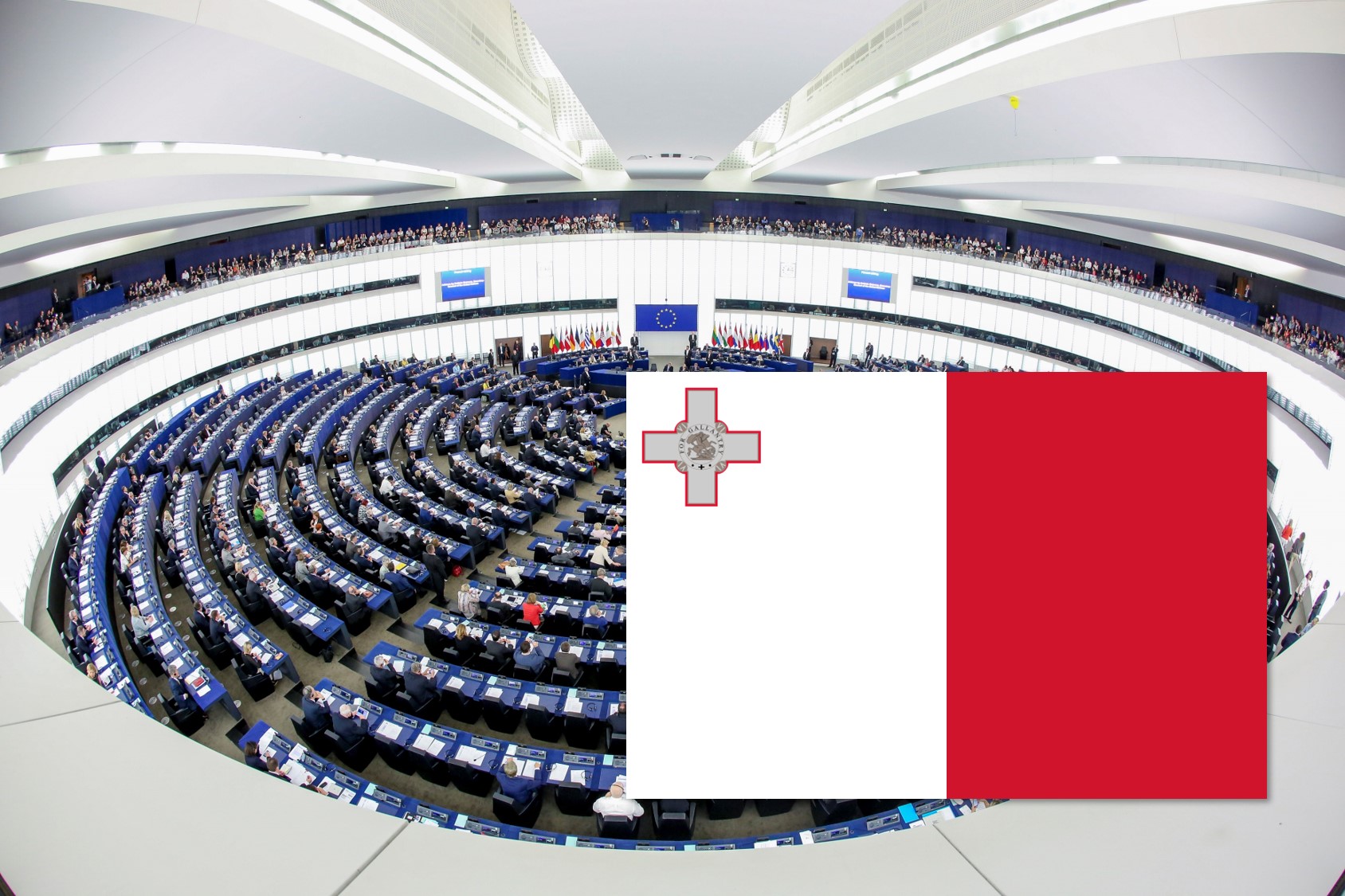 Contrary to the general European trend, the Maltese Labour Party [Partit Laburista (PL), S&D] won the European election held on the 25 May by a comfortable majority and took four of the six European parliament seats allotted to Malta. In 2014 it had also won a majority of votes, but only three seats (Carammia and Pace, 2015). The opposition Nationalist Party [Partit Nazzjonalista (PN), EPP] failed to arrest its electoral decline whose roots go back to 2004, but won the other two seats.

As in the previous three European elections the Europhile parties won more than 96% of the valid votes cast.[1] This is consistent with the public opinion surveys conducted by Eurobarometer which show that the majority of Maltese are supportive of the EU.[2]

The election result does not confound the public opinion polls published by the leading national newspapers prior to the election which predicted a PL victory between 55-57%.[3]

The governing PL secured a comfortable majority of votes (54.3%), taking four of the six parliamentary seats allotted to Malta [Refer to Diagram]. The opposition PN won the other two seats with 37.9%, but its vote tally contracted by 2,174 while Labour’s grew by 6,805 votes.

Contrary to European trends, Democratic Alternative’s (Alternattiva Demokratika, AD, Greens) share shrunk from 7,418 (3% of valid votes cast) in 2014 to 1,866 (0.7%) – a drop of 5,552 votes. This must have been influenced by the fact that two of AD’s star candidates, Arnold Cassola and Michael Briguglio, had changed party allegiance. Altogether, their votes almost equal the number of votes lost by AD in comparison with its 2014 result.

Diametrically opposite were the fortunes of the right-wing, anti-immigrant party Empire Europe (Imperium Europa, IE) which won 8,238 votes, overtaking AD as the third party after the PL and PN. Close behind it with 5,276 votes came the Democratic Party (Partit Demokratiku, PD) which contested the European election for the first time, but which had managed to win two seats in the national parliament in the 2017 election on the back of a short-lived electoral coalition with the PN.

Turnout and the campaign

In 2019, voter turnout declined for a third consecutive time – but the fall was bigger in traditional PN strongholds prompting speculation that Nationalist voters may have shown their disgruntlement with the party leadership by staying at home.[5] The 2019 turnout at 72.7% was much higher than the EU average turnout of 50.5%. However, while the EU’s turnout improved for the first time in two decades, the Maltese one continued to fall down from its very high levels (Hirczy, 1995).

Internal divisions and squabbling have become a way of life among the highest echelons of the PN and party rank-and-file. No policy proposals have so far attracted voters’ attention and induced a sufficient number of them to begin to shift their allegiance from the PL. The PN’s quixotic campaign on abortion wasted what little energy and desire existed for a positive, propositional campaign.

As for the PL, favourable economic fundamentals still convince the majority of voters to stick with it and surprisingly the strains of rapid economic growth such as rising prices in the housing market, the expanding urban spread, environmental deterioration and growing social challenges are not extracting their toll (Pace, 2017). Nor have serious allegations of corruption, rule of law deficiencies and the erosion of democracy dented the party’s popularity. The chickens may one day come home to roost, some hope, but for the time being they have still not hatched.

Campaigning focused almost entirely on national issues. The PL concentrated on its record in office since it was elected to govern the country in 2013 and was reconfirmed in the 2017.  The PN spent its energy scaremongering voters on abortion, claiming that as a member of the S&D, the PL would succumb to pressure to introduce it in Malta – where it is still illegal and unpopular. The PL criticised the incumbent PN MEPs with harming Malta’s international image by raising rule of law issues in the European Parliament. But its targets profited from this criticism and were re-elected for another term.

When the EU popped up in the verbal campaign deluge it was only to try and stir voters’ emotions by giving the impression that the party (which ever) would fight for Malta’s interests in the European institutions.

Immigration, which tops the list of citizens’ concerns was not a main campaign issue although the nationalistic, anti-immigrant parties like MPM and IE tried to profit from it.

Pre-election public opinion polls accurately predicted that the PL would win by a comfortable margin and that the PN was unlikely to hold on to its third seat which it had won in 2014 by a meagre margin of 206 votes. The polls were mostly correct on which candidates were likely to be elected.

The media, both the traditional and the new ones, was heavily involved and manipulated by all sides. Social media has become the pivotal campaign tool in the attempt to sway voters. The dominance of the two large parties in all media sectors ensured the crowding-out of the smaller parties.

Although populism and nationalism did not make inroads in the form of little known small radical parties displacing established ones, both ideologies featured prominently in the political discourse of the mainstream parties. This implies that the final chapter on this phenomenon in Malta may still be pending and the threat has not been completely warded off.

The 2019 election was different from the previous three in some crucial ways. For the first time sixteen year olds were given the right to vote after the 2014 decision to give them the right to vote in local elections. They will also be eligible to vote in national elections with the next one most likely to be called not later than 2023.

The other novelty was that a new electronic system was introduced to hurry the vote counting but the election results could only be published in the early hours of Monday some thirty hours after the closure of the polling stations.

Concurrently with the European elections, voting also took place to elect all 67 local councils for a fresh five-year term. Previously, these councils enjoyed a three-year mandate and elections were held in successive years for three groups of councils. In 2015 Act XL approved by Parliament, grouped all Local Council Elections and scheduled them to take place on the same day of the European elections.[6]

The déjà vus were many, the most salient one being that the electoral campaign was almost confined to domestic, national issues. The intensity and style of party campaigning was no less intense than in previous electoral contests. The main tussle was between the governing PL and the opposition PN. The PL billed it as a contest between its leader and Prime Minister Dr Joseph Muscat and the leader of the opposition, Dr Adrian Delia.

The small parties came nowhere near to winning a parliamentary seat. Extremist, Eurosceptic and anti-immigrant parties performed better than they normally do in national elections, but at no time where they a threat to the mainstream parties.

Of the six MEPs elected, four are incumbents, and the leading candidates in both main parties were women. The first to be elected was Labour’s Miriam Dalli with 63,438 preference votes who will lead the PL delegation in the next five years and on the Nationalist’s side it was Roberta Metsola with 38,206 votes. Both incumbents were elected on the first count, in the slightly complicated Single Transferable Vote (STV) voting system (Katz, 1984) where voters mark their preferences (1, 2, 3…etc) on the ballot sheet and are permitted to cross party lists, although few do so.

Five of the six MEPs are university graduates and hold a doctorate – four of them in law. Dr Alfred Sant is a former PL leader and Prime Minister. The rest have never been elected to the Maltese Parliament.

The European election in Malta had no surprises and followed closely a presaged script. It lacked many of the cleavages present in the rest of the EU – but this is not to say that they were completely absent. Anti-EU and anti-immigration feelings simmer under the surface, held back by the weakness of their most vocal proponents, the so-called fringe or peripheral parties, and by the absoluteness of the dominant Europhile parties.

Malta’s economic success has also helped in conjuring a positive image of the EU and to keep these forces in check. However, this situation is dynamic and may not last for ever as indicated by the gains made by IE.

Katz, R. (1984). The single transferable vote and proportional representation. In A. Lijphart and B. Grofman (Eds.), Choosing an Electoral System: Issues and Alternatives. New York: Praeger.

[3] Times of Malta, 19 May 2019. online portal at https://www.timesofmalta.com/articles/view/20190519/local/labour-on-track-to-capture-55-per-cent-of-vote-poll-suggests.710181; MaltaToday 19 May, online portal at https://www.maltatoday.com.mt/news/europe-2019/95082/maltatoday_survey_labour_set_for_another_landslide_in_european_elections#.XO-kHntS9PY

[4] All figures quoted here are the official ones published by the Electoral Commission, Malta at https://electoral.gov.mt/ElectionResults/MEP (viewed 28.05.2019).

[6] The whole text of the ACT is available on the Justice Portal at http://www.justiceservices.gov.mt/DownloadDocument.aspx?app=lp&itemid=27225&l=1