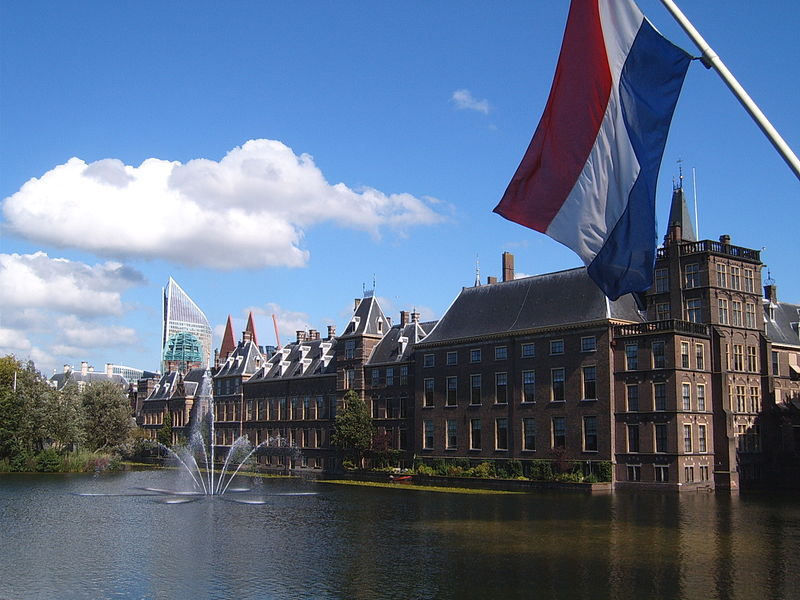 Falling in a Western European context of increasing electoral unpredictability and party system change (Chiaramonte and Emanuele 2015), the upcoming elections in The Netherlands are receiving a lot of media attention in the international press, as it is the first of a range of upcoming European elections (before France and Germany) that are expected to mark the future of European politics. Consistently with an international context where right-wing populism is on the rise, with the election of Donald Trump and the candidature of Marine le Pen, in the Netherlands, Geert Wilders’ party (PVV) has taken a lead in the opinion polls and his strong position is gaining international attention.
In this context, focusing on the main issues debated in the current electoral campaign is crucial to understand, on the one hand, the current state of Dutch public opinion and, on the other hand, whether it is possible to outline a ‘Dutch agenda’, namely a set of specific goals over which there is a general consensus that may represent the starting common ground for building the next governing coalition. Moreover, what is relevant here is to assess whether (or not) the Dutch public opinion is characterized by a specific Zeitgeist: is it dominated only by right-wing concerns (e.g. immigration), or are there other issues where there is a strong support for left-wing opinions? This relatively simple question relates to a fundamental question of contemporary party politics: whether the success of ‘populist’ parties is due to some general ‘right-wing wind’ in the public opinion or, rather, whether this success is due to the better ability of such parties to exploit the available issue opportunities. For example, the presence of ‘left-wing’ issue opportunities would testify that, rather than the general ‘wind’ in public opinion, the real problem for mainstream left-wing parties lies in their inability to exploit their available opportunities.
In the CAWI survey that we at CISE conducted few weeks before the election, respondents were asked to express their support on 15 positional issues (which are those divisive issues that refer to two rival goals, e.g. like public spending vs. tax cuts). Specifically, each respondent was asked to position himself on a 6-point scale where the points 1 and 6 represented the two rival goals to be pursued by a given issue. Later, over those issues, respondents were asked to indicate the priority they assign to the selected goal. The questionnaire also included five valence issues, namely issues that refer to one shared, common goal over which a general agreement is assumed (e.g., protection from terrorism). On these issues, a support of 100% is set by design and respondents are only asked to attribute the level of priority. The selection of both positional and valence issues was made in cooperation with a team of Dutch researchers. 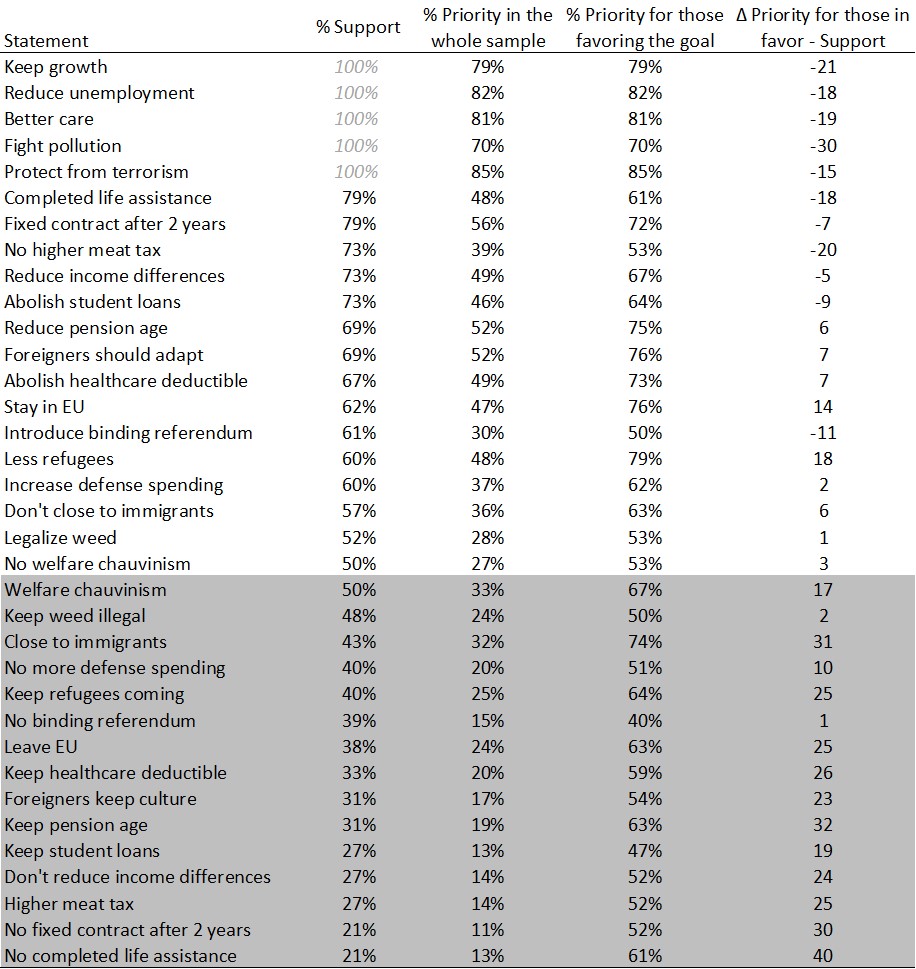 By examining the level of support for different goals (and, later, also the priority attributed to such goals), we are able to map the current state of Dutch public opinion, and also the potential structure of opportunity for Dutch parties in this campaign. For each goal, Table 1 reports: its level of support in public opinion (the percentage of people in favor – for positional issues – while for valence issues we theoretically assume that 100% of the sample supports the goal); the priority of that goal in the whole sample (the percentage of respondents attributing a high priority to that issue); the priority for those favoring the goal (the percentage of respondents choosing that goal that attribute a high priority to that issue); finally, the difference between priority for those favoring the goal and support.

A first interesting piece of evidence that emerges by looking at Table 1 is that, among the positional issues, a certain number of goals appears to be highly shared by the Dutch population. Specifically, there are two goals shared by 79% of the respondents: the ‘completed life’ issue, related to the possibility for elderly who think their life is finished to be assisted in ending their life, and the issue related to fixed term contract to be given to employees after two years of temporary contracts. Just below these two highly supported issues, other goals are shared by a substantial portion of Dutch voters. There is a wide agreement especially on some leftist issues: in particular, the requirement of fixed term contracts, the reduction in income differences, the abolishment of students loans, the reduction in pension age and eventually the abolishment of the deductible in health insurance. All of these can be generally conceived as economically leftist issues, and all of them show a support of 69% or higher in the population. Moreover, a culturally leftist goal emerges, the previously mentioned pro-euthanasia stance. Among these largely supported goals (i.e., those shared at least by two-thirds of respondents), only one traditionally rightist goal emerges, namely the requirement for foreigners to fully adapt to the Dutch culture.

The prevalence of leftist economic orientations among the most supported goals represents the first empirical finding of this analysis. It means that, in a way, there is not a one-directional right-wind Zeitgeist in the Dutch public opinion but, instead, there are large issue opportunities for leftist parties (in some following analyses, we will see how these opportunities are actually exploited by the Dutch leftist parties). However, moving down in the list of issues presented in Table 1, and entering an area where goals become more divisive (albeit still supported by more than 50% of respondents) we see the emergence of conflict related to the European Union, immigration, and welfare chauvinism. All in all, the combination of these two aspects emerging from this first analysis of goal support patterns shows a clear bipartition of the 15 selected positional issues: a prevalence of economically progressive issues among the most supported goals and a presence of conservative, culturally ‘demarcationist’ issues among the most divisive goals.

Yet, sheer support for a given goal tell us only part of the story. What is also of interest is to take into consideration the priority assigned to each goal. By doing this, our interpretation of the current state of Dutch public opinion becomes more articulated, and it is possible to outline a map of the issue opportunities potentially available for Dutch parties. Interestingly, valence issues (i.e. those goals we ex ante identified as shared goals) emerge as the goals with the highest priority assigned by Dutch citizens: all of them are considered as the top priorities to be pursued, with a percentage of people indicating a high priority around, or higher than, 80% for four valence issues: protecting the country from terrorist attacks, reducing unemployment, improving care for elderly and disabled people, and maintaining the current economic growth. Only the shared goal of fighting environmental pollution falls in a lower position, but still with 70% of people attributing a high priority to it. This evidence suggests that there indeed is a common priority pattern across different segments of the Dutch society, suggesting the presence of a relatively homogeneous ‘Dutch agenda’ (here will soon come interesting comparisons with analogous data on France), despite the traditional (and, in part, newly emerging) presence of significant divisions in the Dutch society over multiple issues and cleavages.

Moreover, something even more interesting emerges as we focus on the priorities assigned by Dutch citizens to the rival goals defined on positional issues. Here, in terms of broad ideological orientations, the situation seems to be reversed compared to the previous analysis of levels of support. Despite being highly supported, many economically leftist goals display in fact a lower priority with respect to cultural (especially ‘demarcationist’) goals. For instance, two largely supported goals such as the requirement to give a fixed term contract to employees and the abolishment of students loans are considered as a priority by, respectively, 72% and 64% of the respondents selecting those goals, while two goals that are less supported (and thus more controversial), such as the maintenance of the Netherlands in the EU and the need for the country to take in less refugees, are instead considered as a priority by a higher share of respondents: respectively 76% and 79%. And perhaps the clearest example, above all, is the clearly ‘demarcationist’ goal of completely closing the Dutch border to immigrants: although supported ‘only’ by 43% of respondents, it is considered a priority by 74% of those favoring the goal.

This seems to suggest that right-wing parties, although facing a worse structure of opportunity for the strategic exploitation of their favored issues, are more able to promote them into the current political debate. As a result, voters assign a higher priority to those issues compared to traditionally leftist goals. Of course, this hypothesis needs to find empirical verification: this latter will be provided by the analysis of the Twitter communication (by both leaders and parties) that we are currently monitoring, and which will be published after the election.

This result can be better visualized in Figure 1, which plots the relative position of each issue according to their support (y-axis) and priority for those favoring the goal (x-axis). The figure provides a better understanding of the relation between support and priority. A closer look allows us to realize that, together with cultural-demarcationist issues, there are also some leftist issues that benefit from a higher priority for those favoring the goal than the support assigned by respondents, such as the abolishment of the pension age and the abolishment of the deductible in healthcare. This corollary evidence allows to further refine what we have previously stated: among the leftist issues, those perceived as a priority by the population are those returning a more conservative vision of the welfare, particularly linked to ageing dynamics. The general – although absolutely preliminary  – assessment we draw from this analysis is a retreat of the Dutch society that comes back to protection issues rather than promoting a different idea of welfare as an opportunity for new previously excluded citizens.

Figure 1. Support (% selecting the goal – 100 by design for valence issues) and priority (% selecting high priority among those favouring the goal, with normal priority counted 0.5) for both shared and divisive goals. Only goals over 50% are reported. 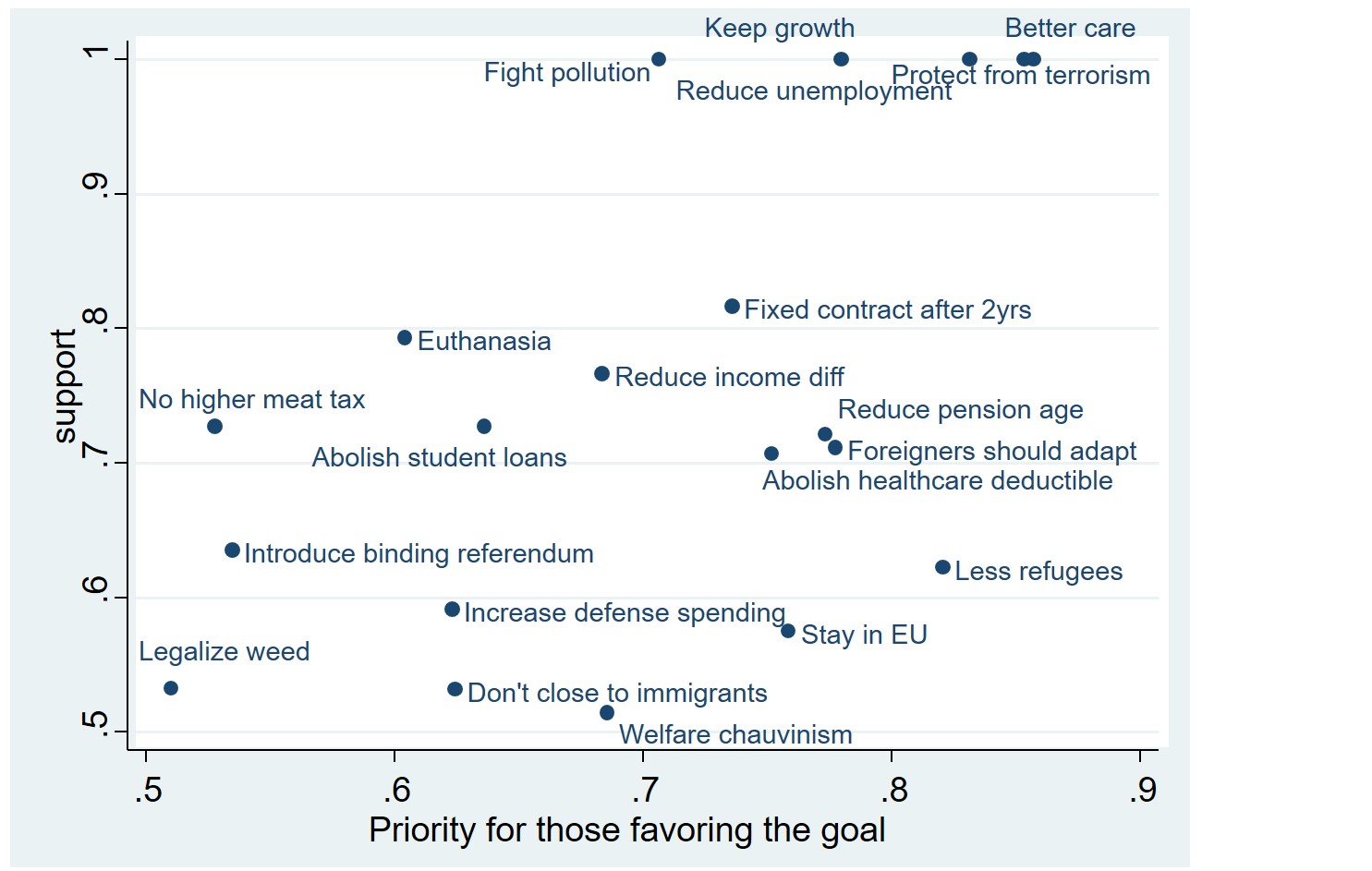 [1] Mathilde M. van Ditmars is a doctoral researcher (PhD candidate) in the Department of Political and Social Sciences at the European University Institute in Florence. In her dissertation she investigates the impact of family dynamics on political socialization processes in Europe. More generally, she is interested in questions of voter and party behaviour and its relation to the quality of (representative) democracy.