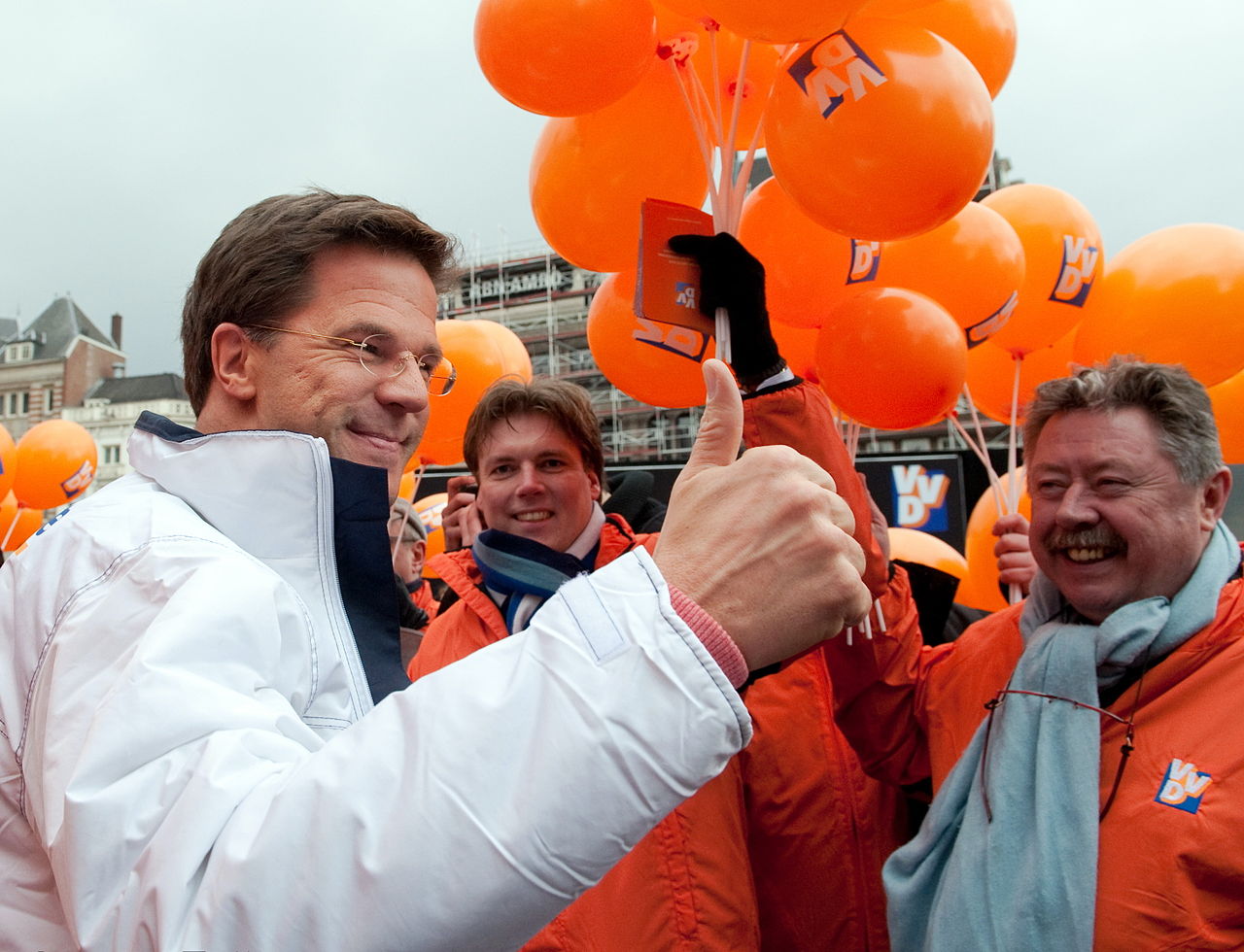 Although the mostly reported outcome of the Dutch Elections, held on 15 March 2017, is that Geert Wilders’ party PVV did not become the largest party, a lot of significant changes to other parties’ support have occurred as well. The most important outcomes of the elections are the historically large loss for Labour party PvdA, and large wins for cosmopolitan party D66 and the Green Left (GL). The picture that appears is an even more fragmented party system than is usual in The Netherlands.

However, our comparative study on issue competition, featuring an original data collection on the Netherlands (see below), drives us to specific considerations about issue politics. All parties that have gained seats, have extensively campaigned on cultural issues. However, when looking at the priorities of a range of policy goals among the electorate, socioeconomic issues rank quite highly. How can this apparent tension be explained? Furthermore, to what extent have the ‘winners’ in this election really exploited their issue opportunities, and have the losers’ failed to do so? 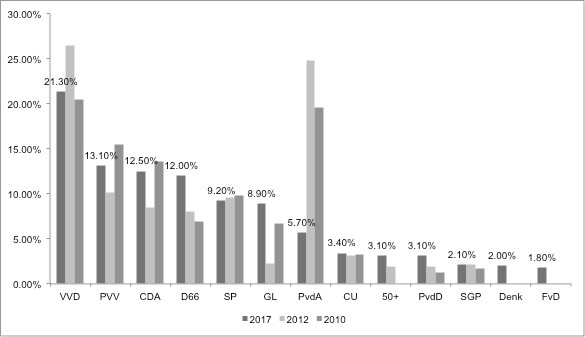 Before going into this question, the election results need to be placed in a perspective that goes beyond the previous election results. During the 2012 elections, horse race reporting has led to a competition between VVD and PvdA to become the largest party, and hence deliver the PM. Both parties ended up with very high percentages of votes (respectively 27 and 25%). This has partially led to a major loss for the green left, who went from 7% to 2% support. Moreover, the Christian Democrats (CDA) were in a crisis and severely punished for entering a government that was supported by the PVV. At the same time, Wilders’ decision to not support the austerity package of the government, which led to calling new elections, caused a loss of votes to the PVV as well.

The picture that emerges now is that most parties that have lost in 2012, have gained in these 2017 elections: this goes for PVV, GL, and CDA. PVV has become the second party (13,1%), the Christian democrats are on the road to recovery again (12,5%), and GL has a historically high support (9%). Another large win is for D66 (12%). Governing parties VVD and PvdA have lost, but VVD managed to remain the largest party (21,3%). PvdA however, was severely punished for having governed with the liberals from VVD.

Previous polls of PVV becoming the largest party have not become reality, and many Europeans have expressed their relief about this. However, as others (both on Dutch and on English-speaking media) have pointed out: The Netherlands has not “said ‘stop’ to the wrong kind of populism”, as Mark Rutte (VVD) declared on election night. On the contrary, CDA and VVD have closer moved towards the discourse of Wilders, taking harsh stances regarding “the Dutch identity” and against Islam. Apparently, this strategy has paid off as Wilders’ win has turned out more moderate than expected, which CDA and VVD have surely benefited. The two winners on the progressive side of the cultural cleavage, GL and D66, have extensively campaigned on their main issues, respectively the environment (GL), and education and a strong EU (D66), but not so much on the economy. Both parties take large distances from nationalist and Islamophobe sentiment, and occupy the political space on the more cosmopolitan side of the cosmopolitan-nationalist cultural divide. The major loser of the elections, PvdA, is mostly known for their socioeconomic positions and does not have a key cultural issue to distinguish them from the other parties. They are clearly taking position in favour of an inclusive society, but GL and D66 do so as well. The wins for GL and D66 have most likely come at the expense of PvdA. Can we therefore conclude that cultural issues are key to winning votes in these elections?

Earlier in March, in the context of a 4-country comparative study that will also cover France, Germany and Italy (see a description of the project and data collection here), we asked Dutch voters to what extent they prioritized a set of divisive goals (after selecting one of two opposing goals) and shared goals (such as fighting pollution or decreasing unemployment), and which parties they deemed most credible for achieving these goals. The results show that the policy goals that rank highest are not solely cultural issues, but also classic socioeconomic issues.

In this table, all policy goals are listed that were given a high priority by at least 30% of the respondents (of whom have chosen to prefer that goal, for positional issues). What emerges is a quite diverse set of issues, ranging from protecting the country from terrorist attacks and taking in less refugees, to further reducing unemployment and income differences, and fighting environmental pollution. Of course, the percentages in agreement differ across these goals, although most socioeconomic issues listed here show relatively high levels of support. A much larger division is found among the cultural issues, especially those related to immigration and integration, and refugees.

Focussing on credibility, it is striking that SP seems to dominate issues related to income differences, health care, and employees’ rights, and not the PvdA. However, PvdA is seen as the most credible party on the valence issue to further reduce unemployment. While PVV clearly owns the issues related to integration, immigration, and the intake of refugees, governing party VVD is seen as the most credible party to maintain economic growth, keep the country safe from terrorism, and remain in the EU. VVD has apparently benefited from delivering the PM in government, while PVV is not deemed most credible at any of the valence issues.

At the same time, PvdA has not been able to exploit the opportunities based on their government experience: even though voters deem the party most credible party on a key socioeconomic issue, this is not shown in the election results. The Socialist Party, deemed most credible on a high number of socioeconomic issues, has not been able to gain more votes than in the previous election. An explanation for voters either turning away from, or not being increasingly attracted by these two left-wing parties for whom socioeconomic issues are key, can be found in the combination of the salience of cultural issues in this election campaign, and clear position-taking of other parties on this dimension.

This leaves us with the question to what extent the winning parties have made indeed the most strategic choices regarding the type of issues they have emphasized in the campaign. Using issue yield theory (De Sio & Weber, APSR 2014) we can calculate the electoral potential that is offered to a party by each of the available conflict issues in the political debate. It is expected that parties select issues that have the highest yield for them and mainly campaign on these issues. The issue yield score is calculated based on voter support by party preference (within-party agreement) and the general support for an issue among the general public. The table below presents, for each party presented, the four “highest-yield” issues, showing indeed that the main winners in this election (GL, D66, PVV) strategically should have emphasized cultural issues related to immigrants, refugees, the “completed life” issue (extension of existing euthanasia legislation), the EU, as they have done. However, also socioeconomic issues are found among these high-yield opportunities, relating to health care and student loans. 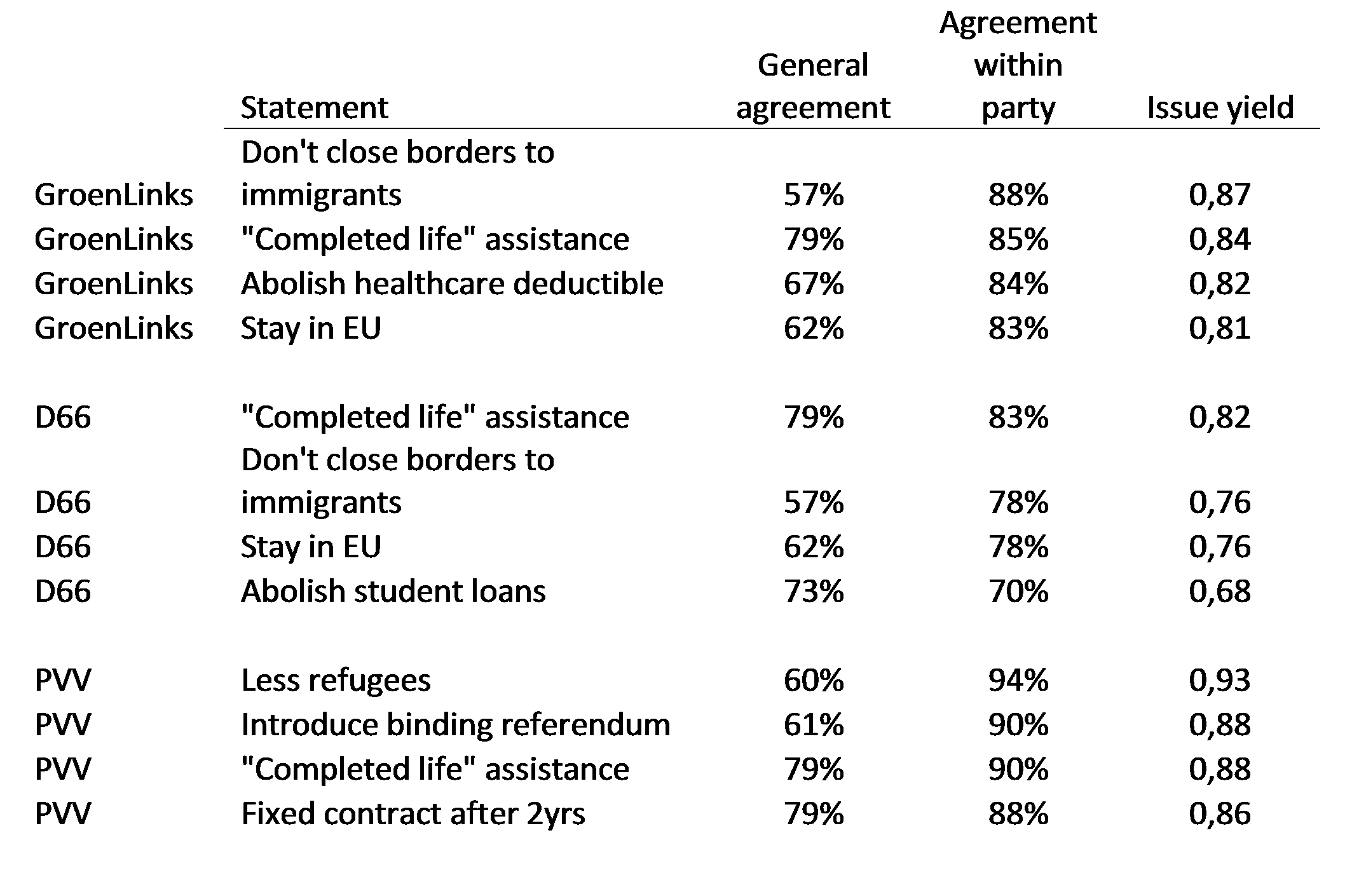 When looking at the issue yield of parties who either lost seats or did not win (VVD, SP, PvdA), we clearly see a purely socioeconomic issue yield for SP, while for VVD is it mostly cultural. For PvdA, it is mixed. VVD has indeed mostly campaigned on cultural issues, while at the same time presenting itself at the responsible governing party, being the credible alternative to Wilders’ party. itself at the responsible governing party, being the credible alternative to Wilders’ party. SP has been able to maintain the current electorate despite the prevalence of cultural issues, while this was not the case for PvdA. Even though their highest issue yield is found on the immigration issue, the PvdA has not been able to exploit this opportunity. In a way, this might be related to the intense multi-party competition of the Netherlands: in this case, we see that other parties (most notably GL) had an almost equally high yield on the same issue, meaning that the PvdA would hardly be the only one to benefit from  emphasis on the issue, as shown by the electoral results. At the same time, they have not been able to turn their governing experience with VVD into something positive, and a recent party leadership change in December has been an important factor here as well. 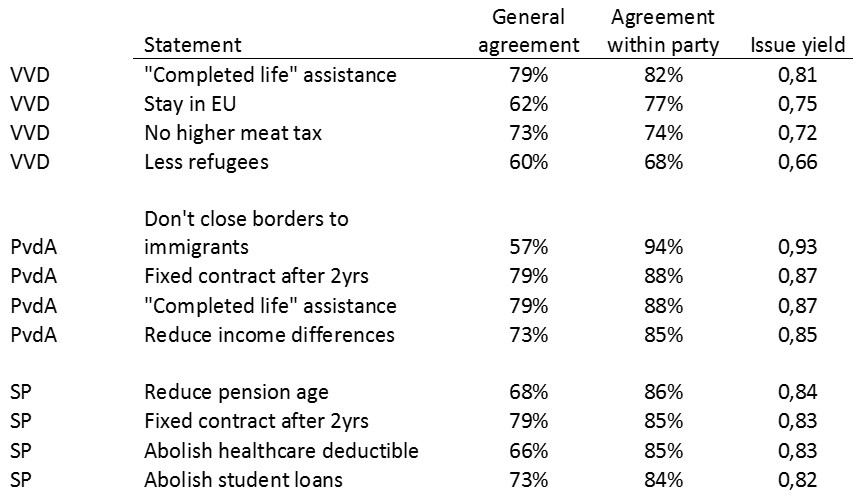 In conclusion, our perspective based on the analysis of issue competition casts a slightly different light on the result of the Dutch election. Our data show that, when looking at public opinion data, the most salient goals and issues appear related to socio-economic questions, while campaign activity (albeit still on the grounds anecdotal evidence, until our systematic coding of parties’ and leaders’ Twitter activity will provide hard data) has been mostly focused on cultural issues. This in a way provides again evidence of the relevance of party strategy for electoral outcomes. Given the aforementioned data, one can hardly speak of a “right-wing wind” sweeping Europe, but rather of some parties that successfully emphasize cultural issues, while others (such as the PvdA) fail to mobilize voters on socio-economic issues. In little more than a month we’ll see (again with CISE data) whether a similar story will unfold in France.