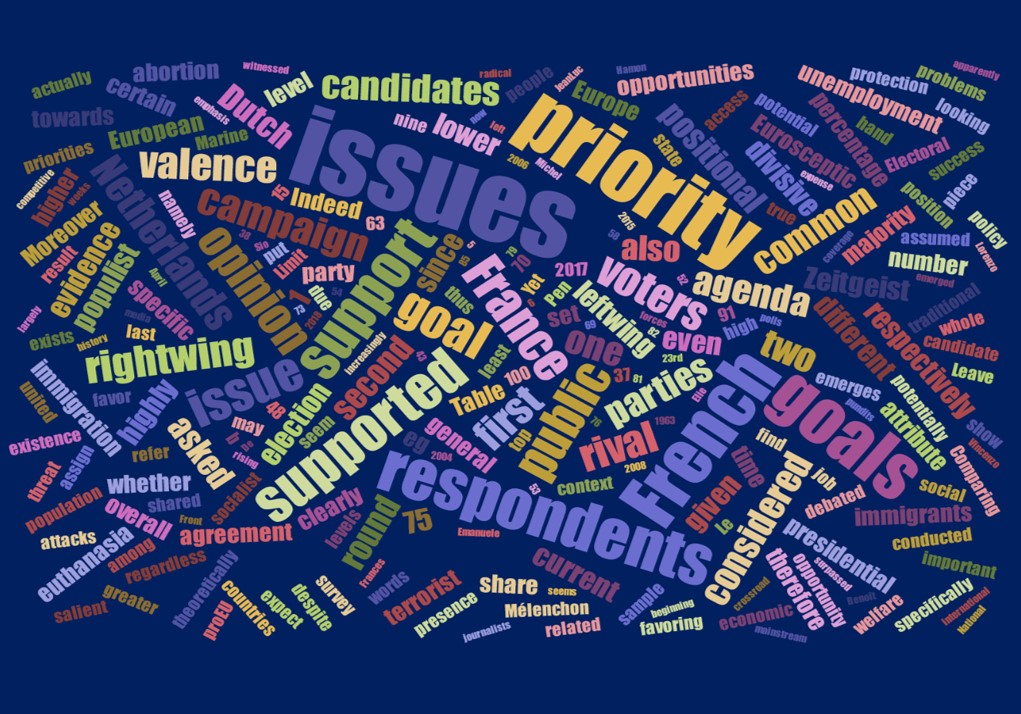 As witnessed by the emphasis and the media coverage of pundits and journalists from all over Europe, the French Presidential election (first round on April 23rd) can potentially be crossroad in European history. Indeed, in an increasingly unpredictable international context, France’s right-wing and left-wing anti-establishment and Eurosceptic forces are rising at the expense of traditional mainstream parties. Opinion polls have not only put Marine Le Pen in the first position of the first round since the beginning of the campaign, for the first time the leader of the Front National seems to be competitive in the second round. Moreover, during the last weeks of the campaign the radical left candidate, Jean-Luc Mélenchon, has emerged and apparently largely surpassed its socialist rival, Benoît Hamon. Mélenchon has now credible chances of accessing to the second round. For the first time since the foundation of the Fifth Republic, neither a socialist nor a Gaullist candidate is expected to access the second round in the Presidential election. Given these premises, it is clear that this election may produce not only an historic realignment within the French party system, but also a decisive turning point for the future of the European Union.

In this context, focusing on the main issues debated in the current electoral campaign is critical to understand the current state of French public opinion and, consequently:

In order to do that, the CISE (Italian Center for Electoral Studies) has conducted a CAWI survey on the adult French population. Similarly to what we have recently done in view of the Dutch parliamentary election last March, French respondents were asked to express their support on 15 positional issues (divisive issues that refer to two rival goals, e.g. public spending vs. tax cuts). Specifically, each respondent was asked to position himself on a 6-point scale where the points 1 and 6 represented the two rival goals to be pursued on a given issue. Later, respondents were asked to indicate the priority they assign to the selected goal for each of these issues. The questionnaire also included nine valence issues (Stokes 1963), namely issues that refer to one shared goal, over which a general agreement is assumed (e.g., protection from terrorism). On these issues, a support of 100% is set by design and respondents are only asked to attribute the level of priority. The selection of both positional and valence issues was made in cooperation with a team of French researchers. 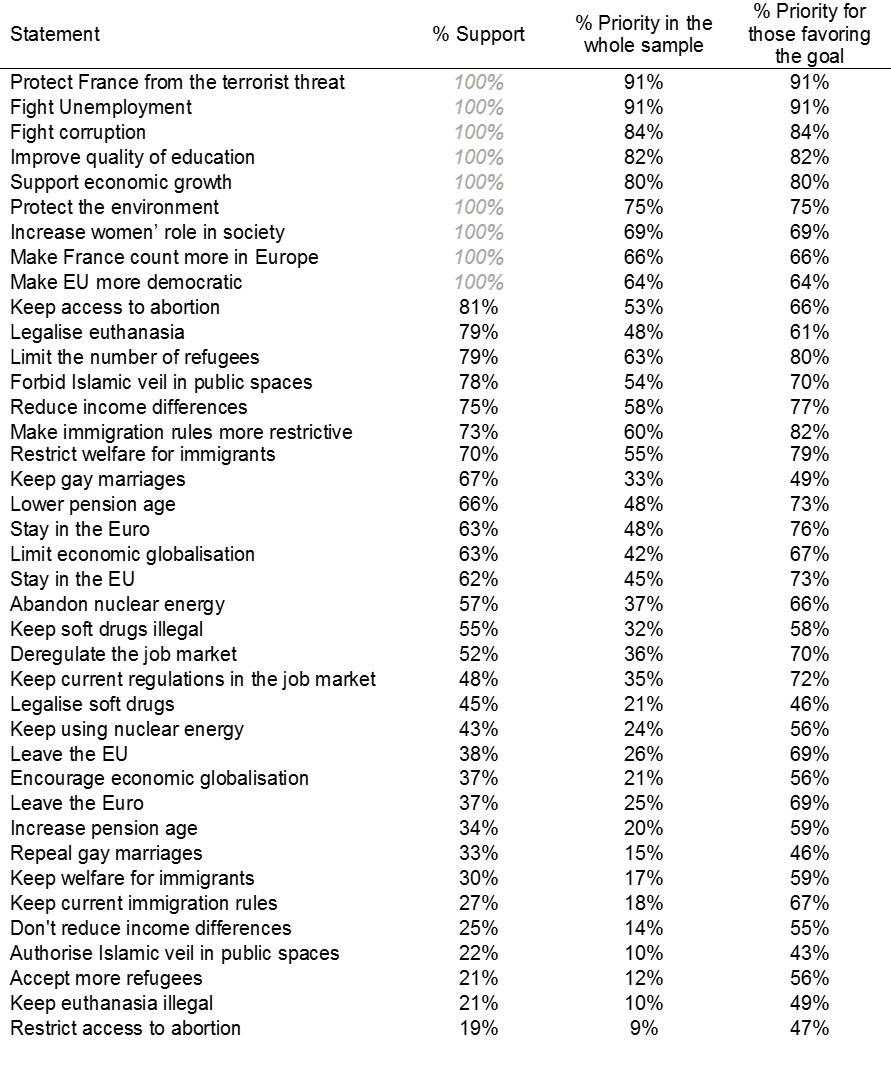 By examining the level of support for different goals (and the priority attributed to such goals), we are able to map the current state of French public opinion, and thus the potential structure of opportunity for candidates in the presidential campaign. For each goal, Table 1 reports the level of support in public opinion (the percentage of people in favor of positional issues – while valence issues are theoretically assumed to be supported by 100% of the sample ); the priority of that goal in the whole sample (the percentage of respondents attributing a high priority to that issue); the priority for those favoring the goal (the percentage of respondents supporting that goal who also attribute a high priority to that issue).

A first interesting piece of evidence that emerges by looking at Table 1: a ‘French agenda’ actually exists (a). Indeed, out of the nine valence issues, six are considered as a priority by at least 75% of respondents. Two specific issues ‘Protect France from the terrorist threat’ and ‘Fighting against unemployment’ are considered a priority by 91% of the respondents. In other words, regardless of partisan affiliations, and despite the ongoing tough campaign opposing the different candidates and their policy proposals, the French public opinion is fundamentally united on many issues: people share some common problems and expect the President to deal with them, whoever he/she will be. Moreover, some theoretically divisive issues are actually highly supported by a large majority of French voters. Indeed, out of the 15 positional issues, 5 display a support for one of the rival goals equal or higher than 75%, thus configuring a sort of ‘quasi-valence’ issues.

Comparing these results with those deriving from the Dutch survey, French public opinion is clearly more united than the Dutch one. In the Netherlands, notwithstanding the presence of some shared goals, the overall priority for the valence issues was lower (the top priority was 85% for one issue against 91% for two issues in France), and only two rival goals resulted supported by 75% or more of the respondents (against five in France). All in all, the overall priority appears to be higher in France than in the Netherlands: the average priority, considering both valence and positional issues, is 43% in France against 37% in the Netherlands. This may attest to a greater restlessness of the French society, whose voters are conscious that a larger number of problems have to be put in the agenda, compared to the Dutch case.

Yet interestingly, voters in both countries share some common goals, such as the protection from terrorist attacks and the fight against unemployment, they are respectively the first and second top priorities in both countries. This is not surprising, given that, on the one hand, the threat of terrorist attacks has dramatically become a salient issue in all Western democracies since the assault to Charlie Hebdo in January 2015. On the other hand, since the end of 2008, the hit of the harshest economic crisis after WWII has spread the problem of unemployment (or at least the perception of it) across all over Europe, even if in France this issue has been on the agenda for a long time. Therefore, these two issues seem to configure the presence of a common ‘European agenda’. This is an important piece of evidence, which obviously needs to be confirmed by further analyses to be conducted during upcoming elections in Europe (Germany in September 2017 and Italy in February 2018 at the latest). The French and Dutch societies share another common feature: their fundamental secularization. Among the most supported divisive goals, we find social issues such as euthanasia (to be extended in the Netherlands and to be legalized in France) and access to abortion (only in France, not asked in the Netherlands), supported by 81% of French respondents.

If it is true that a French agenda is clearly identifiable, it is also true that right-wing issues tend to dominate the debate (b). In this respect, whether a specific Zeitgeist exists, it is clearly oriented towards right, and specifically towards immigration-related goals. This is a stark contrast compared to the Netherlands: in this latter country, there was a wide agreement especially on some leftist issues, while right-wing issues appeared as having a higher priority. As a result, there is no ‘Populist Zeitgeist’ in the Netherlands, but conversely right-wing parties have a greater opportunity to frame the debate where left-wing parties fail to exploit potentially profitable issue opportunities. Conversely, in France, following abortion and euthanasia, four goals related to immigrants feature support levels ranging from 70% to 79% of the electorate. All these goals are traditional ‘demarcation’ aspects (Kriesi et al. 2006): limit the number of refuges, forbid the Islamic veil in public spaces, make immigration rules more restrictive, and finally a typical policy of welfare chauvinism (‘Restrict welfare for immigrants’). These goals are not only highly supported, but they are also considered as a priority by a majority of respondents (between 54% and 63% in the whole electorate and even between 70% and 82% among those respondents favoring the goal). Therefore, beyond the undeniable importance of certain valence issues, immigration is certainly the other ‘big issue’ at stake in the campaign, and is likely to play an important role in the ballot box. On the contrary, despite being highly supported, social issues such as abortion and euthanasia are considered as a priority by a lower portion of respondents (53% and 48%, respectively).

Besides the dominance of immigrant-related issues, the other dimension that emerges as highly supported and salient is a traditionally left-wing goal, ‘Reduce income differences’. It is supported by 75% of voters and considered a priority by 58% of the overall respondents (the second absolute priority after ‘Limit the number of refugees’). Yet, this aspect is quite isolated, given that other ideologically related goals, such as ‘Keep current regulations in the job market’ are by far less supported and even outnumbered by the rival goal ‘Deregulate the job market’ (respectively supported by 48% and 52% of the respondents).

While we find evidence that immigrant-related issues constitute a fertile ground for the right-wing populist appeal (primarily for Marine Le Pen), Eurosceptic issues seem to stay in the background. They are supported by a minority of the population (38% for ‘Leave the EU’ and 37% for ‘Leave the Euro’) and the priority voters attribute to them is lower than the one for the rival pro-EU goals, (even by looking only at those selecting the goal, 76% and 73% respectively for pro-Euro and pro-EU positions, against 69% of both Eurosceptic goals). Interestingly, attitudes towards economic globalization show a different result, 63% of respondents favor limiting it. In other words, Kriesi’s demarcationist issues should not be a priori considered as a part of a common ground: immigrants, globalization and Euroscepticism show different levels of support and priority, and therefore we should expect a strategical unpacking of the ‘demarcationist menu’ by right-wing candidates. Consistently with these pieces of evidence, candidates should emphasize immigration-related issues and, to a lower extent, anti-globalization stances, while anti-EU consideration should remain in the background of the campaign.