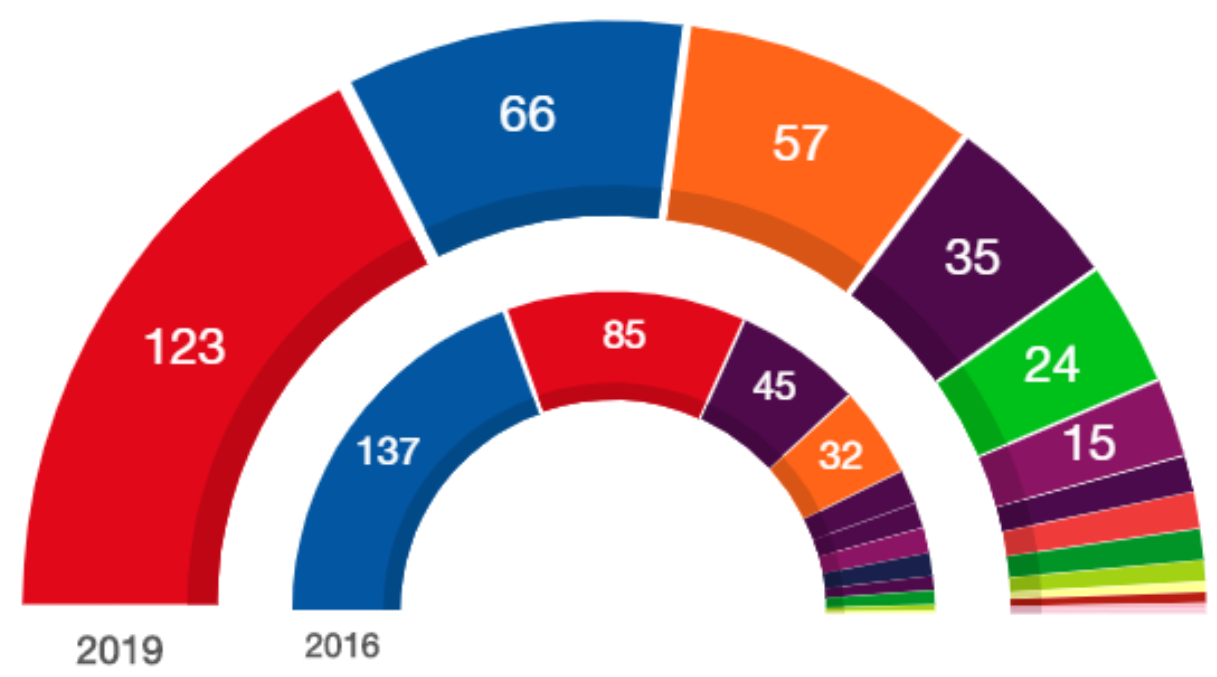 This is the third time since 2015 that Spaniards have voted in a general election. In the first one, the levels of electoral volatility where unprecedented (more than 35 per cent of the voters switched parties between 2011 and 2015) and the number of electoral parties increased in a notable way, from 3.3 to 5.0 (Rama Caamaño 2016). The instability of the party system was profound.

In 2015, the high degree of parliamentary fragmentation made it impossible to secure support from a majority of Deputies and constitute a Government (Simon 2016), so Spaniards had to come back to the ballot boxes six months later. The result was clear: the support for the conservative PP (People’s Party) increased and, although with major difficulties, it was able to conform a Government with the external support of Citizens (Cs). However, less than two years later, in June 2018, the Socialist Party (PSOE) rallied opposition parties to bring the government down in a censure vote (on account of a court having ruled that the PP had benefited from illegal party funding).

To oust the PP, a large number of parties had to join forces: the PSOE, UP (Unidos Podemos, an allegedly populist party), and several Basque and Catalan nationalist parties. The no-confidence vote was successful and brought the PSOE back to power. Nevertheless, and although the PSOE counted with the major support of UP, the low levels of seats of both parties required them to agree with the regionalists whenever they attempted to pass laws. When Catalan regionalist parties refused to back the government’s budget bill in February (they conditioned their support to the celebration of a Referendum of independence in Catalonia), the PSOE’s Prime Minister Pedro Sánchez called for a new election. His Government had been a short-lived one.

In 2019, the novelty was the Spanish nationalist and nativist party, Vox, a split of the PP in 2013. This party obtained an unprecedent support in the 2018 December Andalusian regional elections (Galvez 2018), and all the polls for the General elections forecast that Vox would achieve from 25 to 50 out of 350 seats (Junquera 2019). It supports conservative values and political centralization, and displays a strong Spanish nationalism, as opposed to regional identities and, especially, the Catalan process of secessionism. Thus, the 2019 elections share many characteristics with those of 2016 and, most specially, 2015. The polls have consistently underlined that at least 5 parties would enter the Lower House (Congreso de los Diputados) with a significant number of seats: PSOE, PP, Cs, UP and Vox.

The final results (Tab. 1) partially confirm the polls’ forecasts: following the emergence of Unidas Podemos, which competed with the PSOE in the left (Santana and Rama Caamaño 2018), and Ciudadanos, which gained space in the center, in 2015, Vox, the latest medium to large party, competing with the PP in the right and perhaps also trying to compete for the votes of those who are more critical towards the system (Rama Caamaño and Santana 2019) has entered into the Parliament with 10.3 percent of the votes and 24 seats. The question is clear: which are the electoral bases of Vox in 2019? 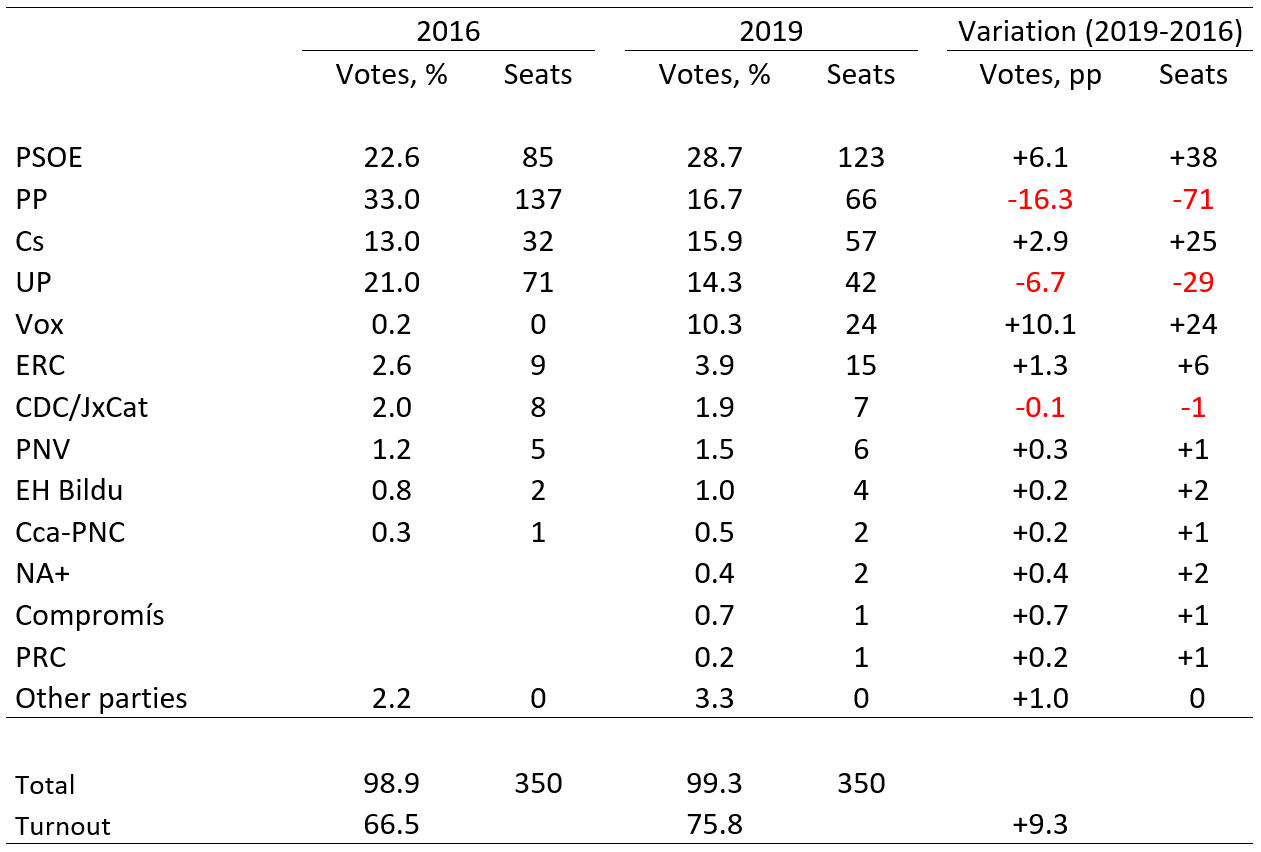 Using data provided by the Issue Competition Comparative Project (ICCP), we present information on the shifts between the 2016 election and the intention to vote in 2019. Regarding Vox, Table 2 shows that close to 19 per cent of 2016 PP voters and 17 per cent of Cs voters intended to vote for Vox in 2019. Although Vox could be classified as a populist party (which are often unclear as to their location on the ideological spectre), it seems clear that their voters come from right-wing parties (Santana and Rama Caamaño 2019).

Being more explicit, Figure 1 displays the electoral movements among parties. The shifts between Unidas Podemos and PSOE are also relevant. Maybe former Unidas Podemos’ voters voted strategically in this 2019 elections and the ensuing electoral coordination of left-wing voters has been crucial in allowing the PSOE to achieve 123 seats (Unidas Podemos has lost 29 seats from 2016 to 2019 whereas the PSOE has gained 37).

Fig. 1 – Electoral shifts between 2016 and 2019, percentages on the whole electorate 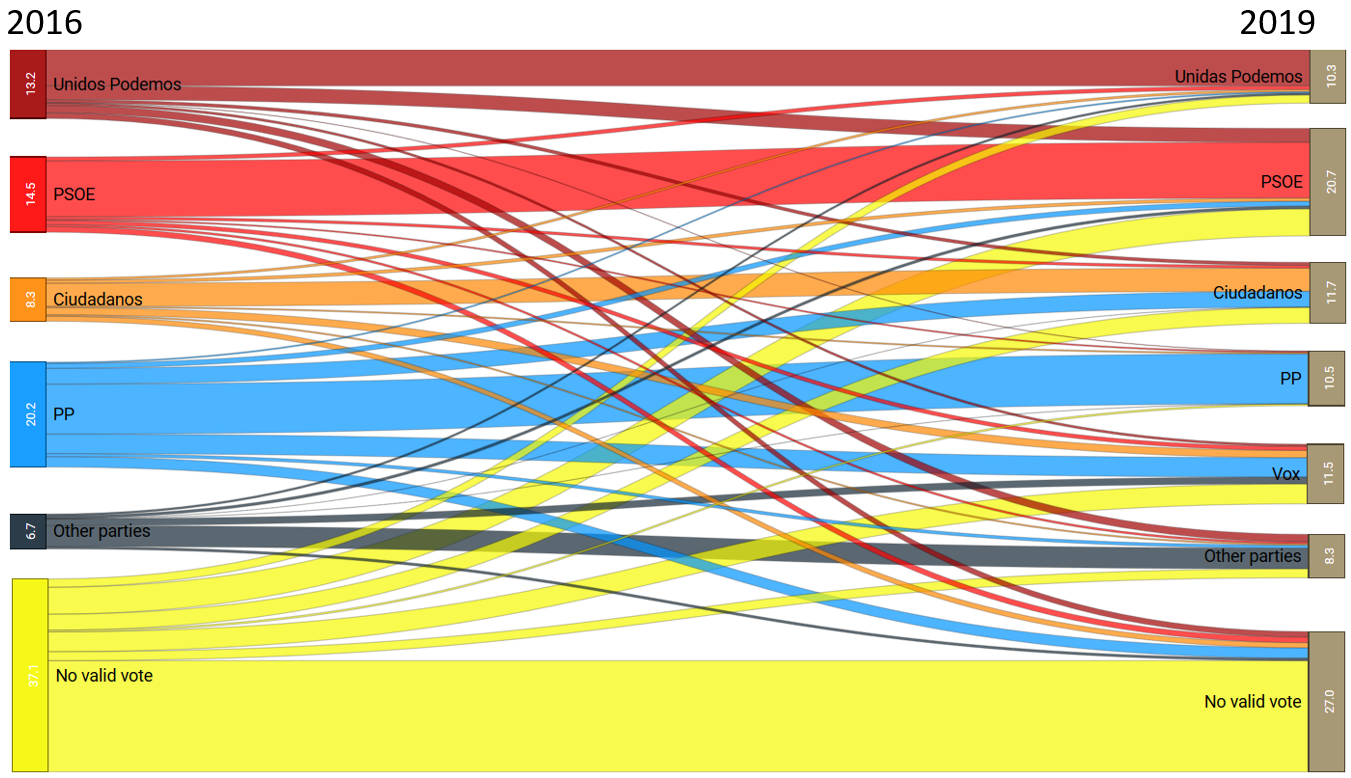 Figure 2 shows the aggregate levels of electoral volatility since 1977 until 2019. The 2019 general elections rank third in the recent Spanish democratic story, after the record levels reached in the 1982 and 2015 elections.

Although the PSOE is the winner of this election and the PP is the big looser (it has lost more than 70 of the 137 seats it held in 2016), the electoral results have an undoubtful by-product: the enormous difficulties to build a coalition Government. Thus, the immediate consequence of this remarkably more fragmented map is a greater ungovernability and unpredictability of the political system. The atomization of political representation can lead to more complex legislatures, unstable coalitions of government and weak governments of short duration.

Thus, although during the electoral campaign, Albert Rivera, Citizens’ leader, repeatedly stated that he would not participate in a coalition Government with the PSOE (20 minutos 2019), the unique simple coalition that sum more than 176 seats (the Parliament has 350 seats) is PSOE + Citizens. Other coalitions would need more than two parties or, at least, the external support of minor (regionalist) political formations.

The results are clear, but the future, at least in terms of governability, is as blurry as than at the Sunday’s 28 April morning.

Rama Caamaño, J., & Santana, A. (2019), ‘In the name of the people: left populists versus right populists’, European Politics and Society, Online first.