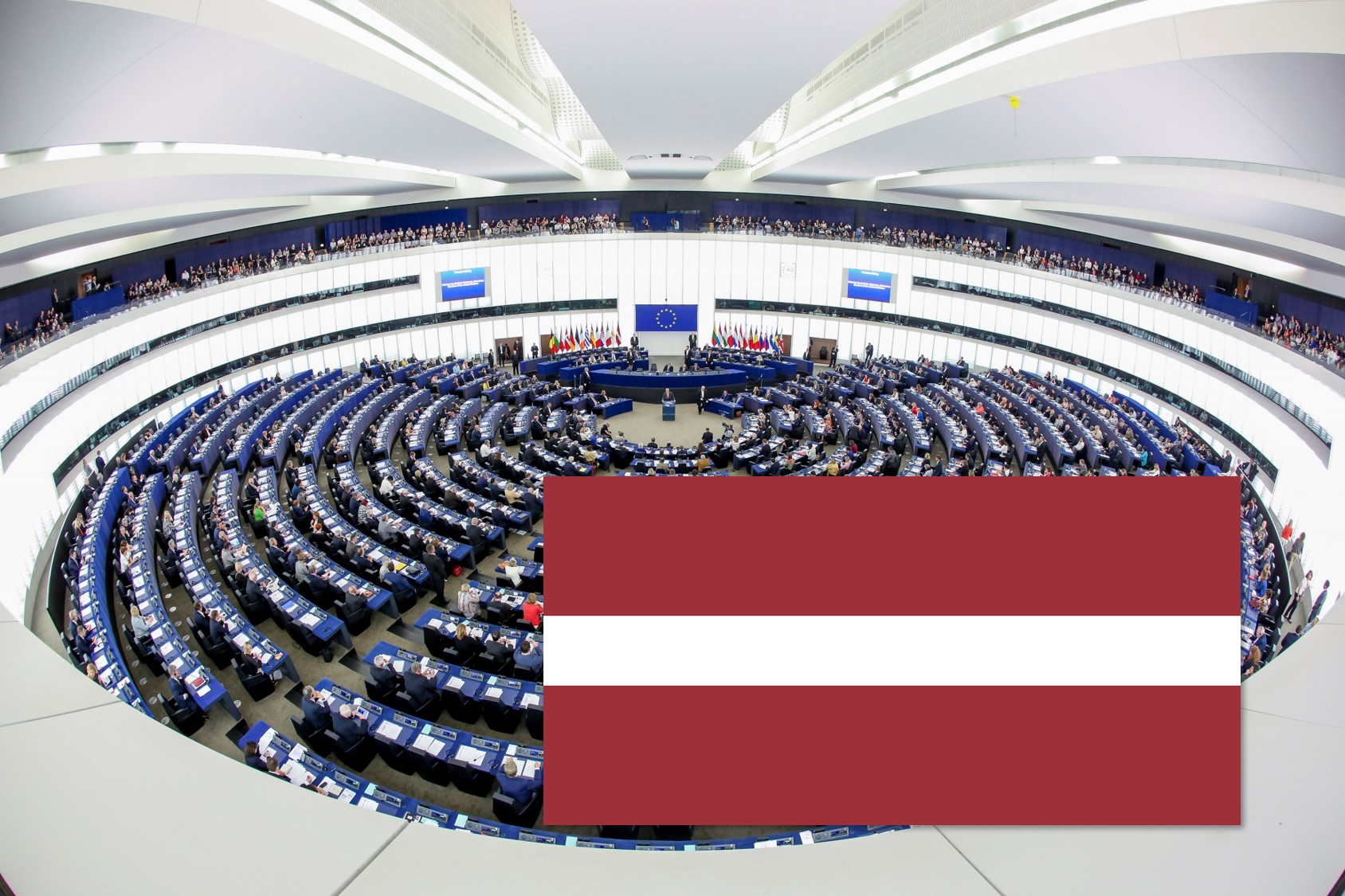 Latvia was one of the few EU countries that went to the polls on Saturday, May 25 although advance voting was also available for three days. According to the Central Elections Commission (CEC), there were 1’411’955 persons eligible to vote – a decrease by 4 percent from 2014. A party list system is used to choose eight MEPs, and a voter can express either a positive or a negative preference for each candidate on a list that s/he is to vote for. An electoral threshold of 5 percent is provided in the law but the effective threshold (due to the small number of seats) tends to be higher. Contrary to the parliamentary elections that are organized in five electoral districts, the whole country constitutes single electoral district in the EUropean elections.

Both registered political parties and their alliances having no less than 500 members are allowed to field candidate lists in EUropean elections in Latvia. CEC registered 16 candidate lists representing both coalition and opposition parties in the national parliament along with parties that did not clear the electoral threshold in the 2018 Saeima elections and organisations that did not participate in those elections.

Electoral performance of parties that were recently elected to the Latvian parliament constituted one of the intrigues of the campaign. Both the New Conservative Party and the KPV LV party mobilised their supporters by heavily criticising the government and charging the political establishment with corruption and mismanagement of public administration. As a result of a complicated coalition building process, both became part of the ruling coalition headed by Prime Minister Krišjānis Kariņš of New Unity. That, however, coincided with an ebb of popular support for the KPV LV party, which prompted some pundits to conclude that the accession to the executive was not politically beneficial for this populist party. Moreover, the party faced intensive political infighting among its political leaders that arguably contributed the decline of the party’s support. The New Conservatives, however, stood united and suffered almost no loss of public support.

Yet, it was the Social Democratic Party “Harmony”, a main advocate of political interests of Slavic minorities, that experienced the most turbulent campaign. The party was largely caught by surprise in February when MP Vjačeslavs Dombrovskis was removed as the party’s top candidate to be replaced by Nils Ušakovs (Harmony), a long-serving Mayor of Rīga, and Andris Ameriks (Honoured to Serve Riga), former Deputy Mayor of Rīga and a close ally of Ušakovs, against the background of corruption charges brought against a number of managers of the largest municipal transportation company. The meaning of this sudden overhaul became more visible in May when the Anti-corruption Bureau searched premises of the Rīga Tourism Development Office (RTDO) a few weeks before the elections and media reported about financial transactions implicating the use of RTDO funds to finance the 2018 national election campaign of “Harmony”. After this news emerged, Ušakovs disappeared from the public sight just to underline “Harmony”’s inclination to avoid many public discussions throughout this campaign. Moreover, this may explain why the party’s posters depicted Frans Timmermans (PES) instead of local leaders.

Manifestos of major contestants seemingly afforded more attention to EUropean issues (as compared to earlier campaigns) and revealed a great deal of support to increasing the percentage of gross national income to be redistributed via the EU budget. While more funding for higher education and research in the next multiannual financial framework was broadly shared, centrist parties such as Development/For! and the Progressives were keen to redistribute the support provided by the Common Agricultural Policy (CAP). This was opposed by several right-of-the-centre parties, most notably by the Union of Greens and Farmers that, on the other hand, emphasized fostering of bioeconomics, reduction of waste and transition away from fossil fuel. Centrists took the lead in offering EU-related solutions to social problems in Latvia – creation of a pan-European pension fund, setting a uniform minimum wage formula, or even introducing a uniform tax system across the EU.  To this end, they were joined by the pro-Slavic Harmony party that inter alia pledged to fight nationalism and xenophobia and called for a direct access of municipalities to EU funding. This take on devolution was further elaborated by the Russian Union of Latvia calling for a federal EUrope and extensive cultural autonomy of ethnic minorities in the EU.

The New Conservative Party and the National Alliance, in turn, wanted to increasingly allocate EU funding for vocational education and life-long learning to meet the demands of labour market. The two parties saw the EU as yet another mechanism to provide security from Russia by means of battling misinformation, improving cyber security and supporting select EU Eastern neighbourhood countries. The two spoke about the EU as a union of nation states while the ideologically proximal New Unity preferred a strong and united EU that discourages a transfer of ownership of strategic European companies to ‘unfriendly third countries’. The populist KPV LV party offered a catch-all platform emphasizing both human security, economic development, CAP and transparency of EU governance, inclusive society as well as support to culture of smaller nations.

According to data provided by parties, the overall campaign spending will likely have been several times lower than in the 2018 national elections. Harmony and Development/For! emerged as top spenders followed by New Unity and the Russian Union of Latvia. Moreover, media strategies of parties differed. While Harmony invested heavily in TV advertising, Development/For!, Regional Alliance of Latvia and the New Conservative Party prioritised radio adverts. The Progressives and the New Unity geared towards outdoor billboards but KPV LV relied on social media that had worked to its favour in 2018.

The administration of elections, however, was plagued with problems after Arnis Cimdars, a long-standing Chair of CEC, was removed from office in March. Media reported that up to 700’000 eligible citizens may have not received an official letter indicating the polling station at which they are to vote. Although measures were taken to rectify the situation, not all addressees received that information. The government announced that people could go to any polling station on the three days of advance voting. However, this option was closed for parts of the second and third day of advance voting due to a technical problem. This culminated in a Mayor of Daugavpils Andrejs Elksniņš’ statement calling these elections ‘illegitimate’.

The voter turnout rose by little more than three percentage points to reach 33.51 percent of the total electorate. While this was in line with a trend in many EU countries, it ran contrary to a nearly two percentage point decrease of turnout in national elections held in October 2018 when 54.56 percent of the eligible citizens went to the polls. Although the technical problems mentioned above were occasionally blamed for keeping the voter activity low this year, one could argue that the media coverage of this issue increased awareness of the elections and the option to vote at any polling station for a few days actually increased the turnout.

The New Unity received more than a quarter of all votes cast. However, this represented a sharp decline from 2014 when this party garnered support from nearly a half of voters to obtain four MEP seats. The Harmony party, in turn improved its performance to add four percentage points and one MEP seat as compared to 2014. The National Alliance also gained one more MEP seat. The Russian Union of Latvia reaped fruits of a notable investment in the election campaign as its managed to retain one MEP seat in a fierce competition with Harmony. However, the Union of Greens and Farmers continued to lose public support and failed to obtain representation in the European Parliament.

The 2019 EP elections in Latvia arguably underlined the importance of the expertise of candidates in European affairs. The New Unity benefitted from the presence on the party’s candidate list of Valdis Dombrovskis, the Vice-President of the European Commission, and several seasoned MEPs. Roberts Zīle, a long-serving MEP representing the National Alliance, likely mobilised voter segments that would otherwise not support NA. Tatjana Ždanoka of the Russian Union of Latvia, another experienced MEP, helped her party secure a representation in the EP.

In line with the theory of second-order elections, several smaller parties fared well (New Unity, Russian Union of Latvia). Yet, opposition parties yielded mixed results – while Harmony increased its vote share, the Union of Greens and Farmers lost their EP representation. Similarly, new parties had diverging fortunes – the New Conservatives and KPV LV did not clear the electoral threshold while Development/For! obtained one MEP seat.

Although the KPV LV party gained excellent result in the national elections eight months earlier, these populists suffered a crushing defeat in the EP elections. This is arguably not only a reflection of a gradual disillusionment of KPV voters but also a consequence of serious conflicts within the party’s leadership, that will likely result in a disintegration of this party by the 2021 municipal elections.

Slavic parties (Harmony and the Russian Union of Latvia) mobilised their supporters in greater numbers and increased their combined representation in the EP. Some political rivals have hastily claimed this resulted from a low turnout. Based on official returns, this appears to be an Ušakovs effect. Moreover, sending Ušakovs to the EP will likely affect not only his public visibility and support but may also trigger both more profound changes within the Harmony party and competition for the position of Mayor of Rīga.

While EP election results are rarely taken as an indication of party support at the national level in Latvia, some politicians have voiced a proposal to choose the next EU commissioner on the basis of party performance in the elections. This approach is not favoured by several participants of the current coalition, therefore, the next commissioner will likely be a result of a broader political compromise involving other important decisions.