A triple victory for Salvini: numerical (he becomes the center of gravity of the government); geographical (its party is now truly national, with a homogenous electoral support), strategic (he now has several options). 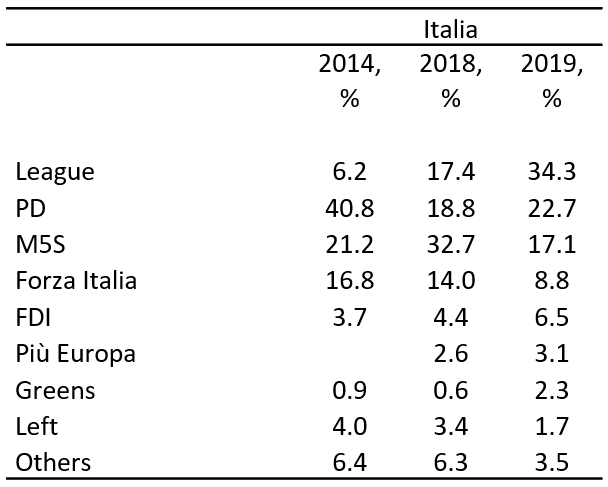 The geography of Salvini’s success is in three numbers: compared to its 2018 results, the League multiplies its votes by 1.5 in the North, by 2 in the Center, and by more than 3 in the South and on the Islands. Thus, the current geographical profile of the League appears to be more nationalized, while the electoral decline of the 5-star Movement (higher in the Northern regions, lower in the Southern strongholds) makes it even more geographically confined to the South, where FDI increases the most.

These are the first remarkable pieces of evidence data from Luiss Cise, the Italian Center for Electoral Studies of the Libera Università of Social Studies, which analyzed the data during the Luiss Election Night, the electoral marathon of the University named after Guido Carli organized in partnership with Sky Tg24, Luiss radio, School of Journalism and Luiss Datalab.

In 2018 Italy was split in two: the League represented the North, the M5S the South. As explained by Lorenzo De Sio, Director of the Luiss Cise: “We wondered who could build a synthesis between the two parts of the country – and their different interests. The answer we get from the result of May 26th is clear: Matteo Salvini has the chance. His League becomes the center of gravity not only within the government but also at the territorial level. And from tomorrow it is also at the center of the party system, because it now has a possible alternative governing majority.”

The M5S, instead, loses more or less a similar share (between 13 and 17 points) everywhere throughout the country. However, this decline affects the North more strongly, where the party had fewer votes, resulting in a halving it. While in the South, where it had about 45%, the party led by Luigi Di Maio lost less – about a third of its votes. So, today, the M5S has an even more Southern profile, and it is by far more peripheric within the new structure of the Italian party system.

Furthermore, Salvini also has a strategic centrality, which derives from his possibility – if he wants – to explore (or even just threaten) an alternative majority. In order to win a majority of the Parliament seats in the next general elections, you need to win 40% of the votes in the PR arena and 70% of the SMD seats. Today, especially in a context of fragmentation of other forces, Salvini can achieve this not only with the classic center-right alliance with Berlusconi and Meloni – which seems almost obvious given these results; but even with only FDI, this time forming a politically homogeneous coalition. In this context, we also note the surprising result of FDI which, despite the noticeable rise of the League, manages to grow considerably.

Given the current tripolar structure, today Salvini is perhaps stronger than Berlusconi has ever been in times of bipolarism. The Cavaliere, in order to win the elections, had always needed a broad and heterogeneous coalition (FI, AN, Lega, UDC). In turn, today Salvini could be competitive just with the party led by Giorgia Meloni.

This possibility calls into question the strategies of the other parties. What will the PD do? Zingaretti has achieved an important result: to ascertain that the party is still alive – moving away from Renzi’s defeat (18.7%), and approaching Bersani’s “non-victory” of 2013 (25.4%). Compared to the 2018 defeat, Zingaretti’s PD has an additional resource: the chance to rebuild the bridges with other parties in the center-left field (such as Verdi and Più Europa). Moreover, the party now enjoys a certain geographical homogeneity in its electoral performance, although it is still a little weaker in the South.