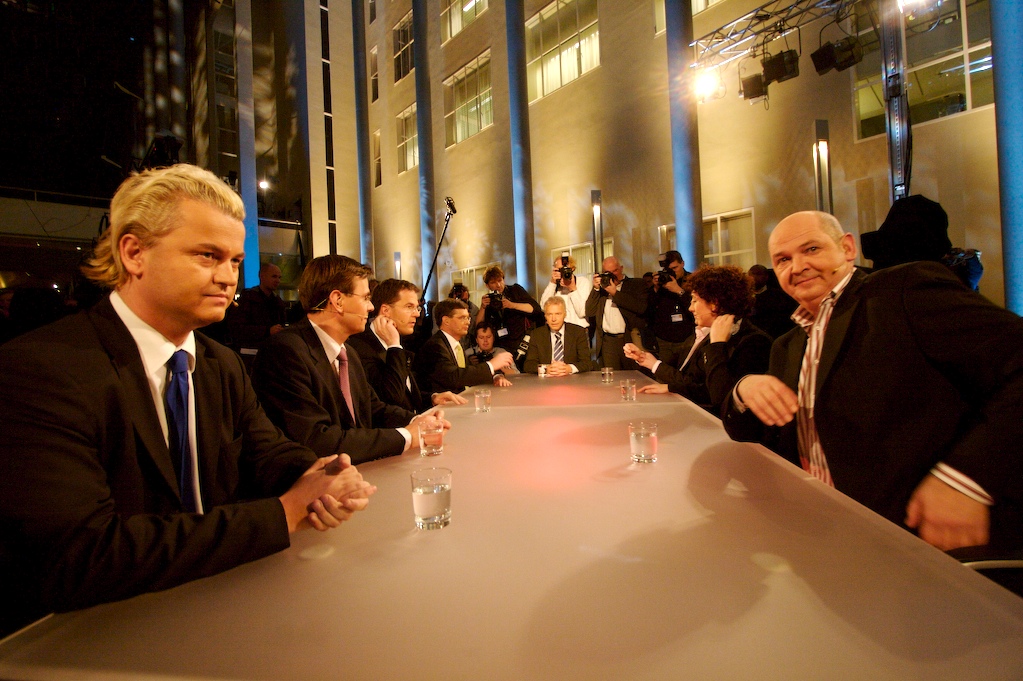 Following on the tools provided by issue yield theory (De Sio and Weber 2014), this analysis provides a specific perspective on the data we at CISE collected through a CAWI survey few weeks before the Dutch election. We rely here on an innovative measurement of positional issues, which allows to derive a common issue yield index for this kind of issues. Positional issues are, in general, defined by reference to two rival goals (e.g. progressive vs. traditional morality): the issue yield measure permits us to assess the presence of strategic issue opportunities for a party. The corghe dimensions originally developed (for positional issues) in the issue yield model are support (how much a policy is supported in the general public) and within-party agreement (how much it is supported within the party) [1]. The two dimensions correspond to the ideal goal of any party: the ability to keep their existing voter base intact, but with the possibility of reaching out to a much larger potential electorate: this is ideally performed through an emphasis on those issues where the party is internally united, and perhaps many voters outside the party also agree.

The issue yield index allows then us to answer the core question: what is – in electoral terms – the ideal agenda of each party? What is the selection of issues that would provide the best electoral return to each party? What is important here is to observe the issue configuration that presents the best opportunity (and the lowest risk) to each party, and then compare it with the actual choice of issues that parties stressed in their campaign, to determine how strategic was their campaigning (which relates to our initial research question). This comparison will first be made in anecdotal terms, while – in a few weeks – the coding of Twitter communication during the campaign will allow us to answer this question in quantitative terms.

Applying this approach to The Netherlands, we are able to answer the above questions for this specific party system, which has been marked during the last years by decreasing support for mainstream parties, especially the Christian Democrats, and, to a lesser extent, the Labour party, and leading positions in the opinion polls for the right-wing liberal mainstream party VVD and the right-wing populist party PVV of Geert Wilders. In light of these developments, investigating the issue yield for all parties in the system may help to explain why certain parties are (potentially) more successful than others. Table 1 presents issues (and related parties) according to the issue yield index, moving from highest to lowest values. In this way, we can see which parties could take advantage by competing on specific issues. Looking only at very high issue yields (>=0.75), there are several positional issues which can provide a very good electoral return to several parties. Indeed, excluding small parties which are below 4% in the voting intentions (highlighted in grey), parties that present a very good issue yield on several issues are the following ones: PVV (10 issues), 50 Plus (7 issues), the animal party PvdD (7 issues), the Labour party PvdA (6 issues), the green party GroenLinks (6 issues), the Socialist Party (SP) (6 issues), social-liberal D66 (3 issues), VVD (2 issues), the Christian Democrats (CDA) (2 issues). These data tell us that PVV, 50 Plus, PvdD, PvdA, GL, and SP, may potentially exploit a considerable number of issues for electoral purposes, while for D66, VVD and CDA the structure of opportunities provided by positional issues is less favorable. That said, the issue yield for a party not only depends on its absolute value, but it should also be considered in relation to the issue yield for other parties. That is, we must look at the issue yield rank. This means that an issue can have a very high yield for a party; and despite this, other parties may have an even higher return on the same issue. Consequently, it can be difficult for that party to compete on that issue, because other parties might be better positioned. For example, the VVD potentially can easily take advantage of the “completed life assistance”[2] position, but there are other 7 parties that can have a better return on the same issue. Similarly, GroenLinks can exploit the “fixed contract after 2 years” issue, but there are other six parties that have a better issue yield on the same theme. Anyway, looking at the issue yield rank, it is confirmed that some mainstream parties like the CDA, the D66 and the VVD have to face a less favorable strategic issue opportunities than other parties, especially the PVV. 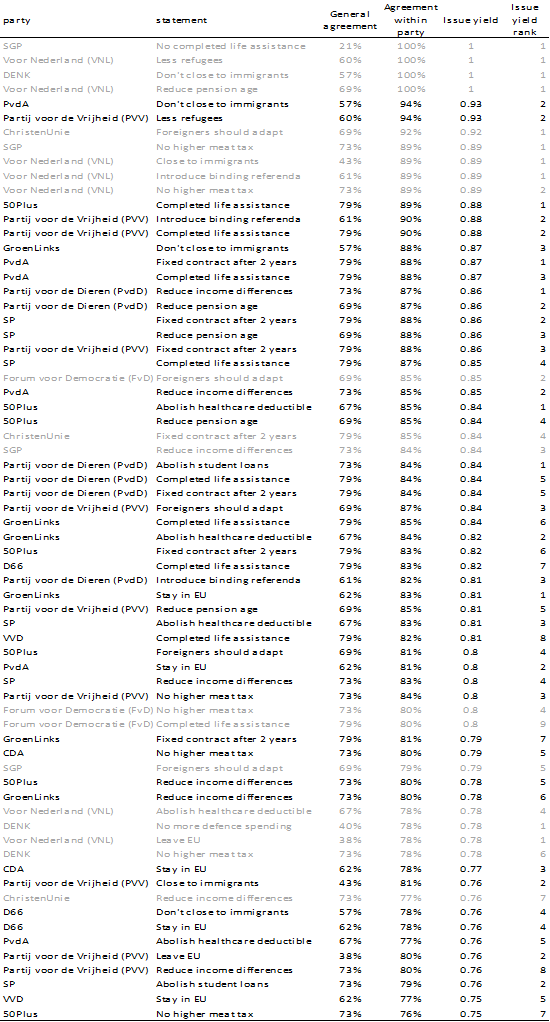 In addition to the issue yield rank, the final point that has to be addressed in order to understand the actual strategic issue opportunities for parties is the type and size of parties that have a similar competitive advantage on the same issue. Indeed, a party that on a specific issue has few and small size competitors is in a better strategic position with respect to a party that despite having a high issue yield, is forced to compete on the same issue with a high number of other parties of the same size (and possibly even of different political families).

Therefore, which is the issue configuration that presents the best opportunity (and the lowest risk) to each party in the Netherlands? The following tables (Table 2, 3 and 4) present the pair of rival goals for the 15 positional issues associated to the Dutch parties. Within each issue, the two rival goals are ordered by the issue yield rank.  By doing this, it is possible to outline a map of the (positional) issue opportunities potentially available for Dutch parties. An interesting piece of evidence that emerges by looking at Table 2 is that, among the socio-economic issues, a large number of goals appears to be beneficial to the different parties. We note there is a huge (potential) competition especially on economically leftist issues: in particular, the goals related to the requirement of fixed term contracts, the reduction in income differences, the abolishment of students loans, the reduction in pension age and the abolishment of the deductible in health insurance. The interesting point is that on such issues not only traditional left-wing parties are competitive, but also right wing populist parties like the two newcomers Voor Nederland (VNL) and Forum voor Democratie (FvD), and especially the PVV of Geert Wilders. Of course, left-wing (PvdA, SP) or environmentalist parties (GroenLinks), present usually the highest issue yields. Nonetheless, there is no monopoly of the left on ‘leftist’ economic issues. The same occurs for a culturally leftist/liberal issue as the ‘completed life’ stance (see Table 3). All the mainstream parties show a good issue yield on this stance and even the PVV presents a very high issue yield (0.88). Therefore, on the one hand leftist parties have several issues that can be beneficial to them in electoral terms; on the other hand they have to face within their core issue domain competitive challengers from different political families. As regards some ‘right-wing’ economic goals, the story seems different. For instance, ‘maintaining income differences’ and  ‘keeping the healthcare deductible’ are goals that provide a significant issue yield for the liberal-conservative VVD and the latter has no (or very few and small) rivals on such issues. As previously said, there are not so many positional issues that present a high issue yield for the VVD. Nevertheless, the liberal-conservatives can easily exploit some economic issues pertaining to their core issue domain.

As expected, the Party for the Animals (PvdD) monopolizes the goal ‘higher meat tax’ with a good issue yield (0.62), whereas the opposite goal provides good issue yields to many parties of different ideological families. 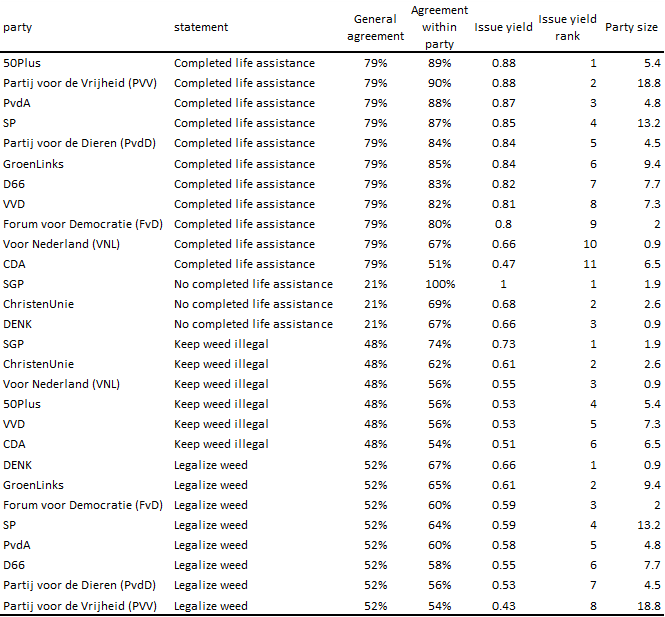 As regards ‘demarcationist’ issues (Table 4), among the most supported goals according to a previous article (i.e., those shared at least by two-thirds of respondents), only one traditionally rightist goal emerges, namely the requirement for foreigners to fully adapt to the Dutch culture. Here it is interesting to notice that such a goal provides not only very high issue yields to religious right-wing (ChristenUnie, SGP) or populist parties (PVV, FvD), but also good issue yields to mainstream (CDA, VVD) or radical-left parties (SP). The opposite goal is monopolized only by the (small) left-wing multiculturalist party DENK.

Finally, as regards the more divisive goals within the electorate – namely those related to the European Union (staying in the EU), introduction of binding referenda, immigration, and welfare chauvinism  –  it is noteworthy to notice that the goal ‘leaving the EU’ is strategic for the PVV, given that it provides an high issue yield without facing ‘dangerous’ rivals (just minor populist parties). Conversely, the opposite goal provides a good electoral yield to all mainstream parties, which have to ‘share’ the electoral opportunities. The same occurs as regards the issue related to ‘closing borders to immigrants’: the PVV is located in a strategic position in terms of issue yield and in terms of number and size of competing parties. As regards the introduction of binding referenda and the attitudes towards refugees, the PVV has to face a little bit more competition. Anyway, Geert Wilders’ party on the ‘less refugees goal’ shows a very high issue yield (0.93), much higher with respect to the issue yields of its main rivals on the right of the political spectrum like the VVD and the CDA. Conversely, the opposite goal (maintain current refugee policy) can be strategically exploited by relatively few competitors: GroenLinks, PvdA and D66. Similarly, as regards the opposition to welfare chauvinism, the better issue yields are showed by DENK, PvdA, GroenLinks, D66. Conversely, as regards the pro-welfare chauvinism, the PVV has to face a certain competition in term of issue yield not only by small religious or populist parties, but also  by other more relevant parties like the party for the elderly, 50Plus, and especially the VVD.

To sum up, the analysis of the strategic issue opportunity structure shows that an anti-establishment right-wing populist party like the PVV faces a peculiar cross-cutting issue configuration that can be remunerative in electoral terms: on the one hand, Wilders’ party is (almost) a monopolist on ‘demarcationist’ issues related to immigration and especially to the European Union; on the other, it is competitive also as regards both traditional economic ‘leftist’ issues related to defense of social protection and leftist/liberal cultural issues related to the defense of individual freedoms like euthanasia. These results confirm that the quite different electoral strategy that the PVV takes seems indeed to be paying off. Their electoral campaign is different with respect to mainstream parties’ strategies in several ways: they only take position on a few issues and stress them all the time through an harsh rhetoric, they do not usually participate in TV/media debates (in which they could be forced to take stances on issues) and they have an election manifesto of one page (https://www.pvv.nl/visie.html).

On the contrary, mainstream parties are ‘confined’ within their traditional issue domains. Furthermore, within such domains social-democratic or radical left parties have to face the competition of other political actors, including new challengers like the PVV.

[1] In the survey, respondents were asked to express their support on 15 positional issues. For positional issues, a first item requires respondents to choose over the two rival goals (it is a 6-point item, thus also allowing all techniques for classic positional items). Once the goal is selected (e.g. defending traditional morality), respondents are asked to mention (multiple choice) which parties they consider credible to achieve that goal.

[2]This issue in Dutch is labelled “voltooid level”. It is not part of the euthanasia law, but it regards additional legislation about ending life with assistance.