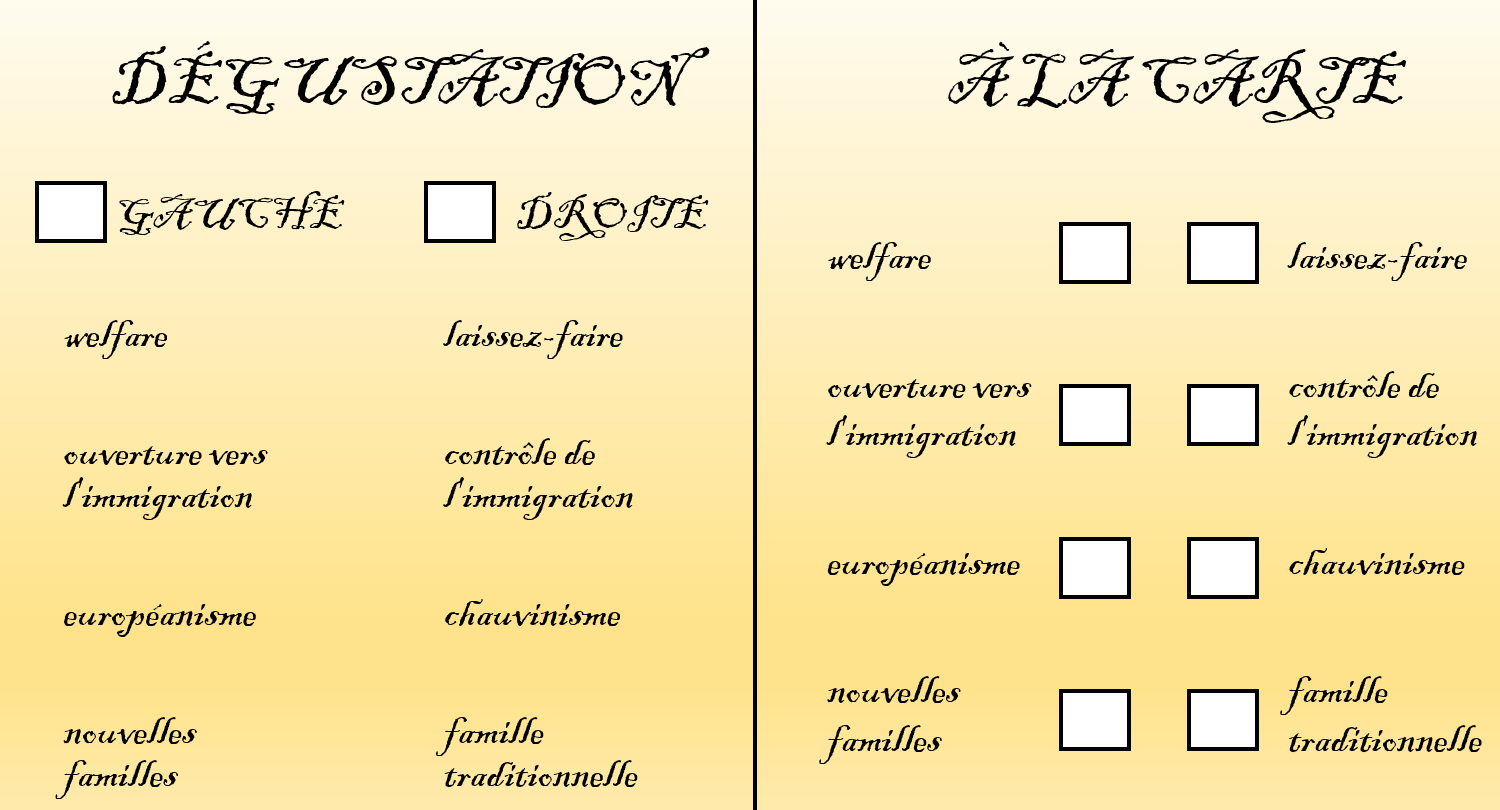 Building on the tools provided by issue yield theory (De Sio and Weber 2014), this analysis looks at the data collected by CISE through a CAWI survey launched a few weeks before the first round of the French presidential election. We rely here on an innovative measurement of positional issues, which provides a common issue yield index for this type of issues. Positional issues are, in general, defined by reference to two rival goals (e.g. progressive vs. traditional morality): the issue yield measure assesses the presence of related strategic issue opportunities for a party or a candidate. The core dimensions originally developed (for positional issues) in the issue yield model are support (how much a policy is supported in the general public) and within-party agreement (how much it is supported within the party)[1]. The two dimensions correspond to the ideal goal of any party/candidate: the ability to keep their existing voter base intact, but with the possibility of reaching out to a much larger potential electorate. This goal is ideally achieved through an emphasis on the issues where the party is internally united, and perhaps many voters outside the party also agree.

Therefore, as regards the next French presidential election, the issue yield index allows to address the core question of presidential campaigns: what is the ideal agenda – in electoral terms – for each presidential candidate? What selection of issues would provide the best electoral outcome to each candidate? The issue configuration is the most relevant, it shows the best opportunity (and the lowest risk) for each candidate; we can then compare it with the actual choice of issues that candidates stressed in their campaign, and thus determine how strategic was their campaign (which relates to our initial research question). This comparison will first be made in anecdotal terms, while we will address the question in quantitative terms (through the coding of candidate’s Twitter communication) in a few weeks.

The French political system has been marked by the record low of decreasing rating approval for President Hollande over the last years, and consequently decreasing support for the Socialist Party. Conversely, the right-wing populist party Front National of Marine Le Pen has been consistently leading the polls. Hollande is the first incumbent president of the Fifth Republic not to run for a second term. This is also the first French presidential election in which nominees of both the main centre-left and centre-right parties were selected through open primaries. Benoit Hamon won the Socialist Party’s primaries and François Fillon won the Republicans primaries. Additionally, this election is marked by the dramatic emergence of Emmanuel Macron, the youngest candidate in the race and a former economy minister who has never run for elected office. He decided to abandon the Socialist government and to found his new political movement ‘En marche!’. Finally, on the left-wing side, Jean-Luc Mélenchon, former candidate of Left Front in 2012, launched his own movement ‘Unsubmissive France’. These five candidates make up for between 80 and 90% of vote intentions in polls, yet six other candidates are also running in the first round of the election.

The issue yield for all presidential candidates may help to explain why certain candidates are (potentially) more successful than others. For the purposes of this analysis, we have focused on the five main presidential candidates according to the opinion polls: Marine Le Pen for the Front National, François Fillon for the Republicans, Emmanuel Macron for his new political movement ‘En marche!’, Benoit Hamon for the Socialist Party and  Jean-Luc Mélenchon for ‘Unsubmissive France’.

The following tables show issues (and related candidates) according to the issue yield index, moving from highest to lowest values. It shows which candidates could take advantage by competing on specific issues. Table 1 presents issue yield indices for Macron, Hamon and Mélenchonand specifically which issues may provide the best electoral returns for candidates competing on the political space from the far left (Mélenchon) to the liberal-democratic centre (Macron). Our results show similarities and differences of potential in the available conflict issues between the three candidates. First, Hamon and Mélenchon clearly share a similar issue area of competition: indeed, some libertarian social issues (keeping gay marriage and access to abortion, legalizing euthanasia) and some traditional left-wing economic issues (reducing income inequalities, lowering pension age) are all  issues that could provide a very good electoral return, having high issue yields (>=0.69). On the other hand, Hamon and Mélenchon are divided by stances towards Europe: for Hamon issues like staying in the EU and in the Eurozone provide very high issue yields – 0.87 and 0.85, respectively (they are the second and the third issue with highest issue yield for Hamon, immediately after abortion at 0.88). Conversely,  for Mélenchon, pro-Europe issues show a much lower issue yield, whereas the issue yield of anti-globalization stances (‘limiting economic globalization’) is good (0.67).

That said, we have to stress that the issue yield for a candidate is not just an absolute value, but it should also be considered in relation to the issue yield of other candidates. That is, we must look at the issue yield rank. Indeed, an issue can have a very high yield for a candidate, but other candidates may have an even higher return on the same issue. Consequently, it can be difficult for that candidate to compete on that issue, because other candidates might be better positioned. For example, Hamon is well positioned as regards pro-Europe and pro-gay marriage issues, ranking second in terms of issue yield, whereas on the same issues Mélenchon ranks sixth and eighth. Conversely, Mélenchon is better positioned in terms of issue yield as concerns euthanasia (ranking third, whereas Hamon on the same issue ranks seventh) and the traditional left-wing economic issue on the reduction of income differences (ranking second, whereas Hamon ranks third).

In fact, data tell us that Hamon is not in a favourable position. Indeed, he is facing a strong competitor on the left (Mélenchon) and at the same time, he faces a good competitor at the centre (Macron). Indeed, Hamon and Macron have very similar issue yields on pro-Europe issues and on social issues (abortion, gay, euthanasia). In particular, Macron has a better return on pro-abortion and especially on pro-euthanasia issue, whereas Hamon has a better return on pro-Europe issues. Nevertheless, these candidates show clear different patterns as concerns the economic policy: 15 points of difference in terms of issue yield as regards the goal of reducing income differences – with Hamon ranking third and Macron ninth. Differences are even larger if we look at the pension policies and, above all, at the labor market policies. As an example, for Hamon the goal ‘keeping current regulation in the job market’ has an issue yield of 0.64, whereas for Macron the opposite goal of deregulating the job market has an issue yield of 0.46.

Obviously, Macron plays a lot on valence issues, and certainly not on ideology.

Table 1 – Ideology or “cherry-picking”? The issue packages that characterize the electorate of each candidate (Mélenchon, Hamon, Macron) and the electoral potential of these packages. 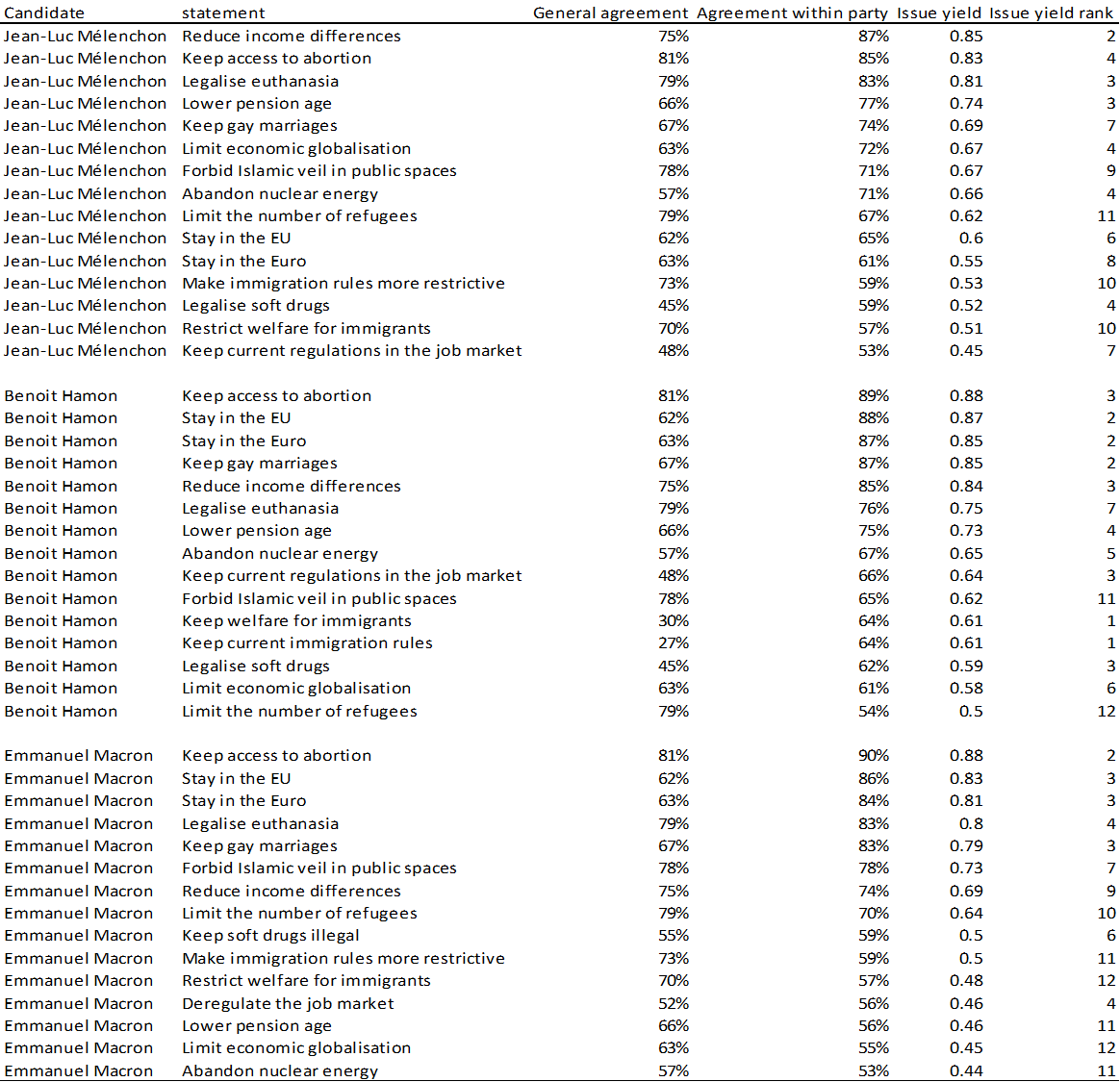 Table 2 shows the results of issue yields for candidates on the right: Marine Le Pen and François Fillon. First, Le Pen scores very high in agreement within her electorate, greater than 90% on some issues. This congruence applies mostly to anti-immigration issues, on which Le Pen enjoys a higher issue yield than any of the other main candidates. Compared to results from a recent similar analysis on Dutch general elections, the level of agreement within candidates’ voters seems much higher in France: candidates reach 90% of internal consensus on various issues, whereas in the Dutch case, only the PVV of Geert Wilders achieved this level. In general, the agreement on positional issues in France is larger than in the Netherlands. For instance, the Islamic veil ban in public offices does not seem to be such a controversial issue, and its yield is higher than 0.6 for all the candidates (even for Hamon is 0.62 and for Mélenchon is 0.67).

A second element of the strategic issue opportunities of Le Pen is that she can build an original package of issues with good electoral returns: hostility towards migrant, anti-Europe and anti-globalization stances, but also economic redistribution (on the reduction of income differences and of the pension age, her issue yield is higher than Macron’s). Furthermore, on some social issues (abortion and euthanasia, but not gay marriage), the level of her voters’ agreement is similar to that of the whole population.

Regarding Fillon, similarly to Le Pen, anti-immigration issues provide very high electoral returns, but he shows different patterns for other issues: pro-Europe stances, economic liberalism and support for nuclear energy. In this regard, Fillon is a classic conservative candidate. Yet, similarly to Hamon, he is not well positioned from a strategic point of view. Indeed, as regards his first four issues (in terms of yield) related to migration, he ranks always after the National Front’s leader who is also more credible on such issues (see previous article). At the same time, the issue yield of pro-Europe goals is lower in comparison to Macron and Hamon’s issue yield.

To sum up, the analysis of the strategic issue opportunity structure shows that an anti-establishment right-wing candidate, like Marine Le Pen, faces a peculiar cross-cutting issue configuration that can be rewarding through an electoral strategy based on “cherry-picking” rather than on traditional left-right ideologies. On the one hand, Le Pen is very competitive on ‘demarcationist’ issues related to immigration and especially to the European Union; on the other, she is also competitive – to some extent – on both traditional economic ‘leftist’ issues related to defence of social protection.

Furthermore, Macron’s campaign based on a strong defence of Europe seem to be well suited from a strategic point of view, as well as his emphasis on valence issues.

Conversely, Fillon and Hamon are not in a favourable position, facing strong competitors on each issue area. In particular, the left turn of the Socialist Party’ candidate seem to have found a significant obstacle: Jean-Luc Mélenchon.

Table 2 – Ideology or “cherry-picking”? The issue packages that characterize the electorate of each candidate (Le Pen, Fillon) and the electoral potential of these packages. 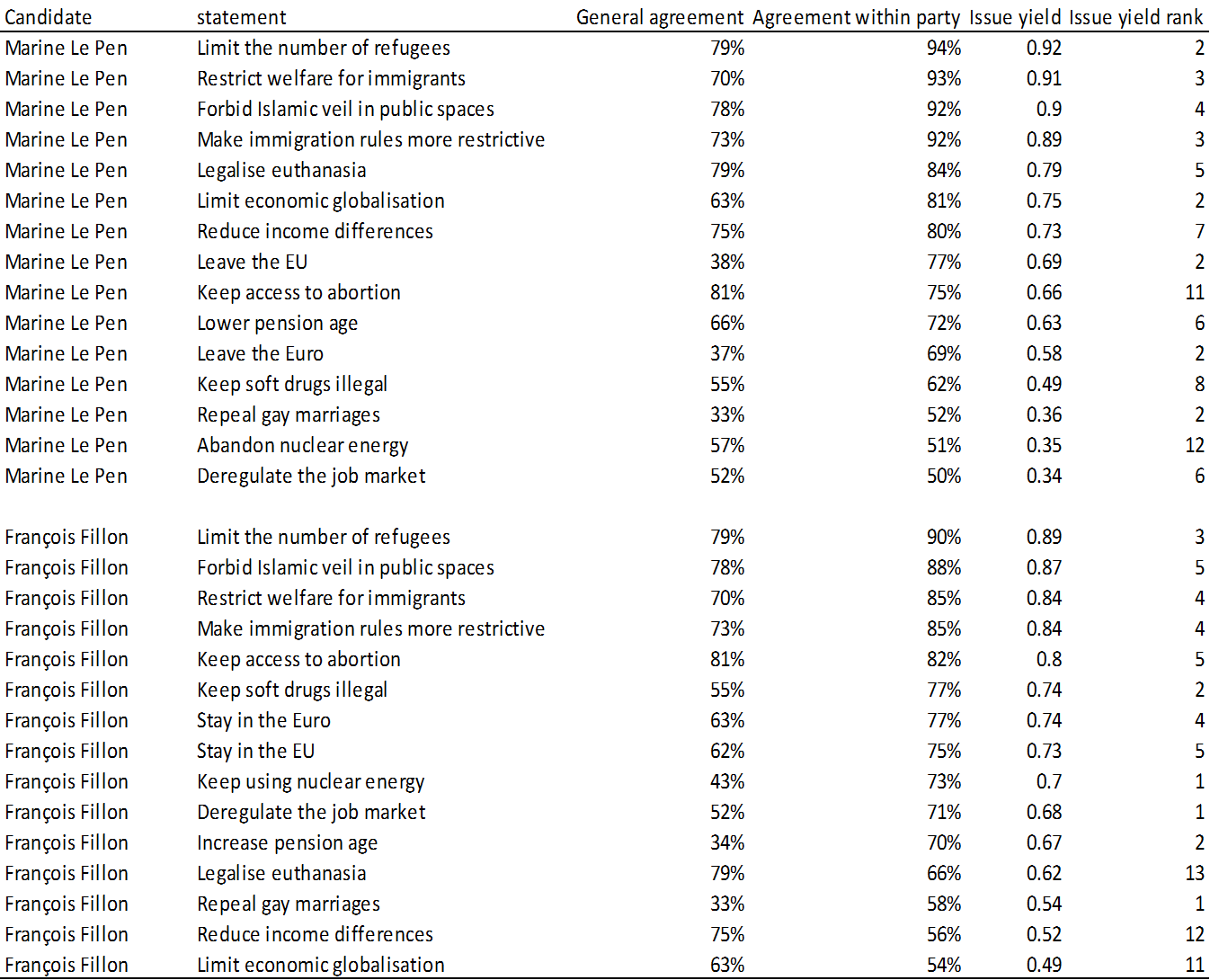 [1]  In the survey, respondents were asked to express their support on 15 positional issues. For positional issues, a first item requires respondents to choose over the two rival goals (it is a 6-point item, thus also allowing all techniques for classic positional items). Once the goal is selected (e.g. defending traditional morality), respondents are asked to mention (multiple choice) which parties they consider credible to achieve that goal.