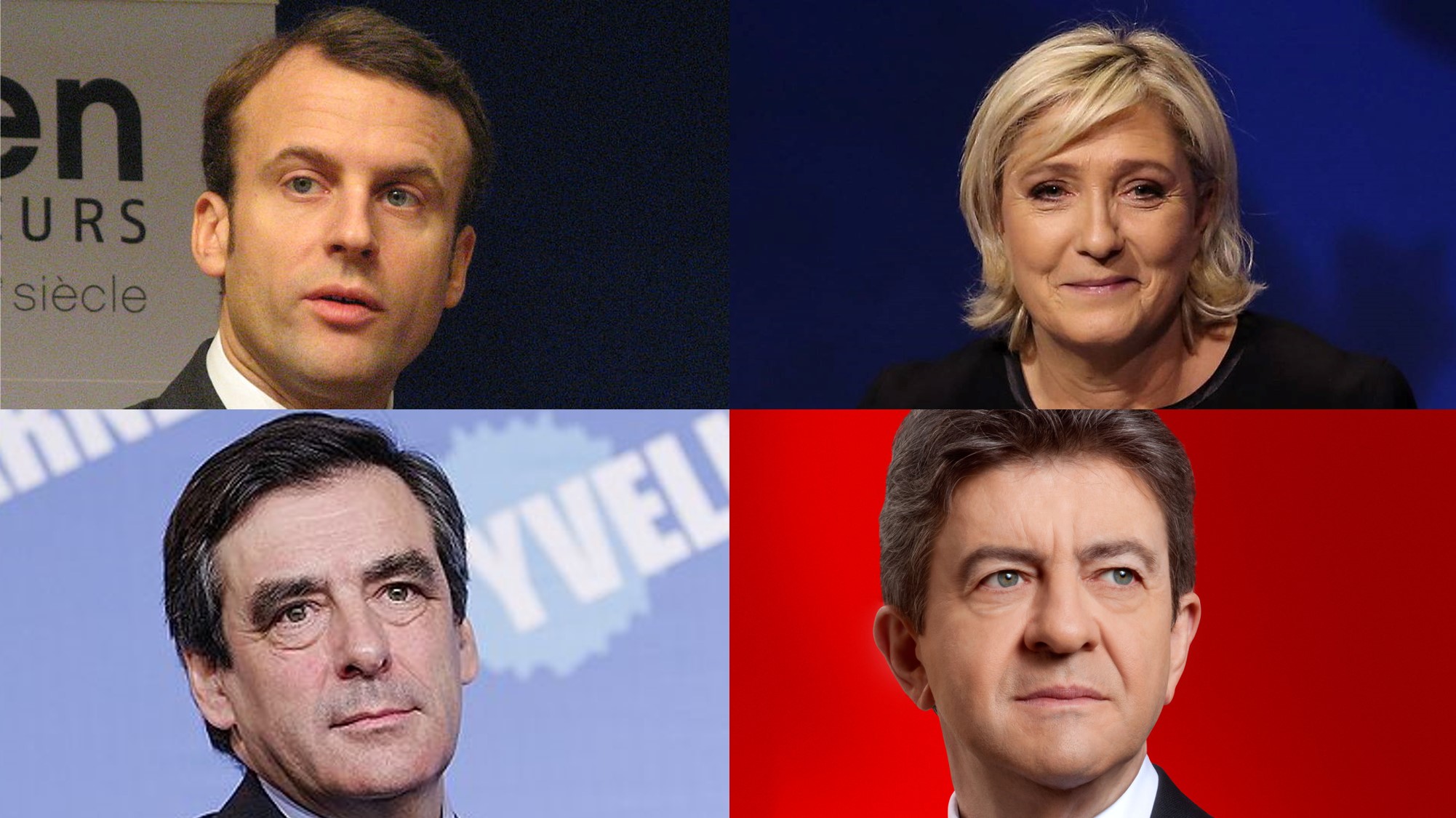 So Macron and Le Pen get to the second round. An historical result that – as almost all commentators highlighted – excludes both socialists and the neo-Gaullist right, who had dominated the French political life for decades.

However, what are the reasons and voting motivations behind this result? Where does Macron’s success come from? What about his cross-cutting appeal? What about Mélenchon’s exploit? Does it come from his controversial positions? Or is it a identification vote by the French left, disappointed with the Hamon candidacy? We can’t answer to these questions only by looking at the candidates’ profiles and their presence on the media; we do need data. Data collected at the individual level, possibly covering a wide range of political issues.

This is exactly the kind of data that CISE gathered few weeks before the election day, through a peculiar pre-electoral survey. It’s a distinctive investigation including a high number of real-world salient issues (more than 20 issues), within a comparative project that has already covered the Netherlands and is soon going to cover the UK, as well as Germany and Italy.

The day after the first round, we analysed these data through specific statistical tools (technically speaking, we estimated, for vote intentions to each candidate, a set of binominal logistic regression block models), in order to understand to what extent different respondent characteristics and motivations determined the intention to vote for each candidate.

For simplicity reasons, we grouped several variables together in four fundamental classes:

It’s quite clear that these four categories present huge differences in terms of vote motivation. Here the crucial question is related to the differences between candidates: is the motivation structure similar for all candidates, or does it change across candidates? In a nutshell: did Le Pen’s voters apply a reasoning that is radically different from Macron’s?

The graph in Figure 1 shows the answer to this first question. For every candidate, the coloured bars represent the ability of our model to predict – on the basis of the variables included in the model – the fact that the respondent expressed his/her intention to vote a certain candidate. This predicting ability can reach a maximum 1, in case of a perfect prediction for all respondents. Reaching 1 is clearly impossible: in voting behaviour research, values of 0.5 or above are considered very good. Each candidate’s bar is divided into 4 blocks, corresponding to the four categories of explicative variables. It must be said that some candidates (especially Fillon) present vote intentions that are much more predictable than others, as visible in the graph. 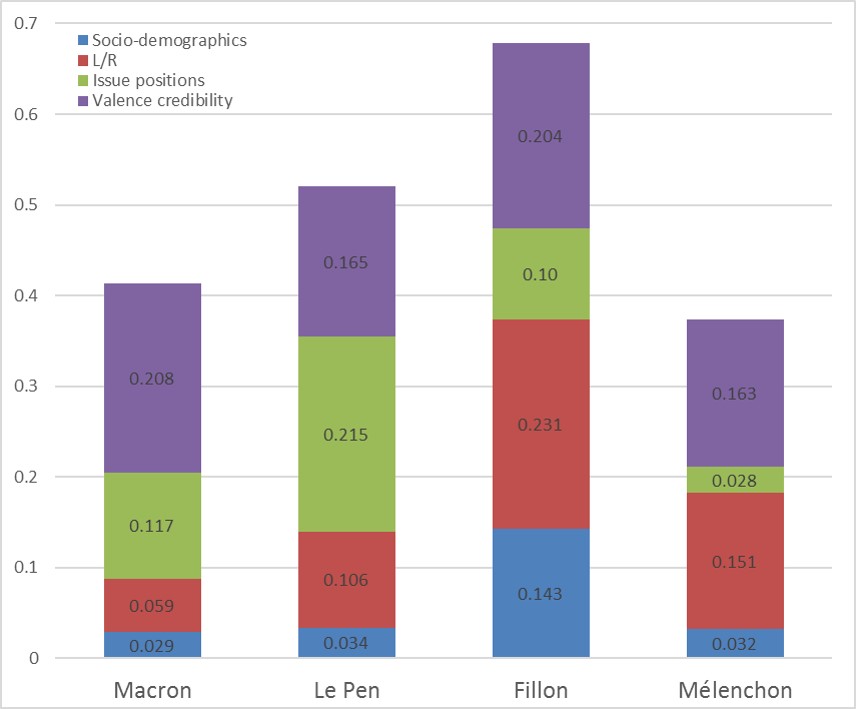 A first surprising finding is related to socio-demographic variables. For three out of the four candidates taken into account, these have basically no impact: with an index of around 0.03, they account for just 3% of variance (i.e. differences among respondents in their intention to vote for the candidate). Yet, there is a remarkable exception: François Fillon. In his case there’s a strong age component: the older sectors of the electorate tend to vote for him more than others – especially those who are over 65. It’s an important effect, that explains around 14% of the differences in respondents’ behaviour towards Fillon.

The two candidates going to the second round are those whose electorates are least characterized in traditional ideological terms.

Significant differences among candidates emerge also when taking into account ideology. Once again, it is an extremely relevant factor for Fillon (voters who place themselves on the right clearly vote for him more than others), contributing with a further 23% at explaining vote intentions towards him. But also Mélenchon seems to be a candidate for whom (left) ideology is extremely important (15% of variance explained). Marine Le Pen follows, yet with a definitely less ideological vote than the previous two (10% of variance explained), and then comes Macron. The latter is clearly the candidate who is least tied to ideological feelings: respondent’s left-right self-placement in the predictive model for voting for Macron improves the model of only 6%.

This is then the first important interpretation element: the two candidates going to the second round are those whose electorates are least characterized in traditional ideological terms. On this regard, Le Pen is extremely similar to Macron.

But similarities stop here. In fact, at this point we enter the realm of positional issues, that is how candidates use in a dynamic way the issues of the day (rather than ideology, which is static by definition), trying to attract voters across ideological lines.

Such issues are traditionally distinguished between two types: those related to divisive goals (controversial issues, on which candidates are identified by taking different positions) and those related to shared goals (also known as valence issues: problems to be solved, on which candidates distinguish one another on the basis of their own competence and credibility).

Here emerges an important difference among candidates, especially between Macron and Le Pen. Vote choice for Marine Le Pen seems to be clearly influenced by specific positions on controversial themes: when we add to the model the respondents’ positions on different issues, the predictive ability of the model for Le Pen increases more than 20%. Other candidates are far behind: for both Macron and Fillon, these variables contribute for only 10%, whereas for Mélenchon such issues are almost irrelevant.

In other words: support for Le Pen, unlike support for other candidates, is significantly explained by positions on controversial issues (we’ll see which ones in a moment).

While for Marine Le Pen the determinant factor lies in controversial issues, for Macron it is his competence and credibility on common problems

Finally, the last category (that is candidates’ credibility, assessed by respondents, for solving several important problems common to all voters) reveals a level of importance which is similar among the candidates, with contributions of variance explained higher than 15%, although it is way more important for Macron (21%) and Fillon (20%), vis-à-vis 16% for Fillon and Mélenchon. It is something that should not surprise: when it comes to solving common problems of the country, two statesmen with significant experience in government (as Macron and Fillon are) are perceived as more credible, and this is part of their appeal. But the important element is that for Macron these are the main voting determinants, and these alone matter just as much as all the other ones combined. Therefore we can say that, while for Marine Le Pen the determinant factor lies in controversial issues, for Macron it is his competence and credibility for confronting common problems facing France. Fillon and Mélenchon appear instead getting most of their support on the basis of ideology, although Fillon can boast in addition a significant personal credibility.

At this point, there’s the curiosity of going into more detail on the role of divisive issues. Which ones in particular are relevant in explaining support for different candidates? Table 1 shows the effect of different issues (if present) in predicting vote intentions for different candidates. For each issue, there is a positive sign (if that position increases support for the candidate) or a negative sign (if that position decreases support); there is no sign if there is no statistically significant effect.

Tab. 1 – Significance and direction of the effects for policy positions on the vote for the main candidates. 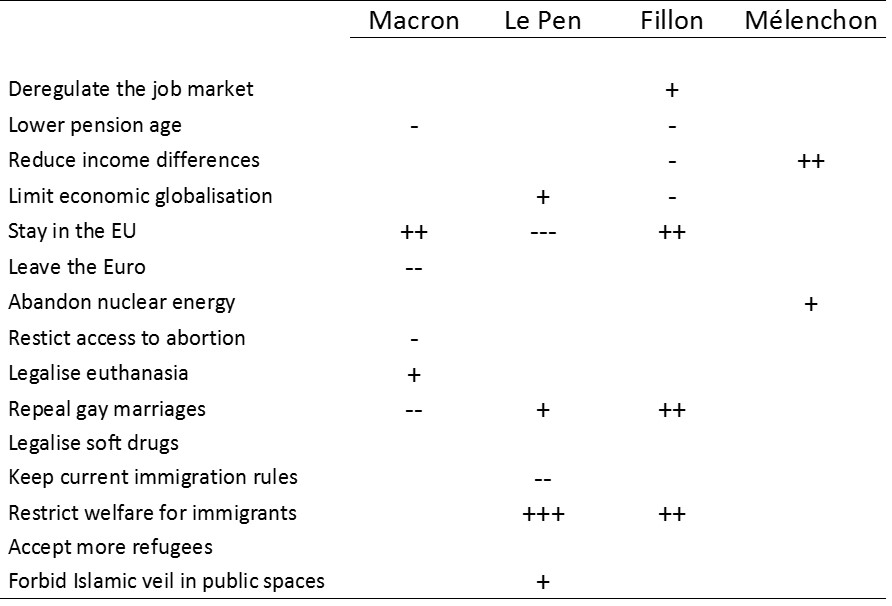 By looking at the table, one important element emerges: each candidate is in fact specialized on different policy issues. This is an increasingly widespread tendency in current electoral campaigns, where candidates tend to focus on few favourable issues, potentially capturing a cross-cutting electorate, without emphasis on other issues (which may lead to divisions, and loss of support).

As for the vote to Macron, Europeanism is crucial, while freedom of choice in the field of rights is quite important as well. There’s a (negative) effect for lowering the retirement age, which tells us that those who want to raise retirement age are statistically more likely to vote for Macron. As a consequence, Macron’s profile seems to be strongly tied to Europe and to a vision in favour of civil rights, and only in a weaker way to economic reforms – which confirms Macron’s ability to de-associate himself from extremely controversial issues like the loi travail.

As for the vote to Le Pen, what emerges is that controversial issues are more important for her than for other candidates, as shown by the greater number of issues having significant effects. Welfare chauvinism has a very strong effect, as well as leaving the EU. Leaving the Euro, though, doesn’t seem to be significant. Quite strong is also the negative effect for the current norms regulating immigration, showing that those who want more restrictive laws tended to vote more for the candidate from the FN. There are then some (positive) – although smaller – effects: limiting globalization, repealing gay marriage, and banning Islamic headscarves in public spaces.

For Fillon, there are even more issues having significant coefficients, but these are on average way smaller than for Le Pen, and that’s why the total increase in variance explained is lower. The strongest effects are on welfare chauvinism, gay marriage repeal, and staying in the EU – that’s the big difference with Le Pen. His free-market profile in the field of economy is then clear: positive effect for the liberalization of the job market and negative effect for lowering the retirement age or income differences.

Finally, Mélenchon is the candidate with the least issue-related vote (his strength, as we saw, lies in ideology). Just two issues are significant, and both of them are exclusive for him, i.e. they do not show any effect on vote models for other main candidates’. The two issues are reduction of income inequality and abandoning nuclear energy.

In this post-ideological time, some political parties ride on the great conflicts connected to contemporary transformations, whereas others hide them and present themselves simply as competent problem-solvers.

In conclusion, we have four different profiles for four different candidates. What can we learn from that? First, that the two finalists do have something in common: for both of them ideology and representation of specific social classes don’t matter much. These candidates get their votes in a new and different way, that is by exploiting current issues and the various problems present in the French political agenda. But analogies stop here and a huge difference emerges. Le Pen’s mobilization strength comes from the position she takes on controversial issues, while Macron’s success is clearly due to people’s perception of him as competent and credible to face the problems of the country. That’s our second lesson: in this post-ideological time, neither all political parties nor all candidates are equal; we shall expect an increasingly asymmetric competition, where some political parties ride on the great conflicts connected to contemporary transformations, whereas others tend to hide them and present a consensual scenario, that only requires competent problem-solvers. That’s why in the second-round vote, on May 7, we will not just see two candidates competing, but rather two different visions of France and – to some extent – two different visions of the great transformation of  contemporary reality. We’ll see.