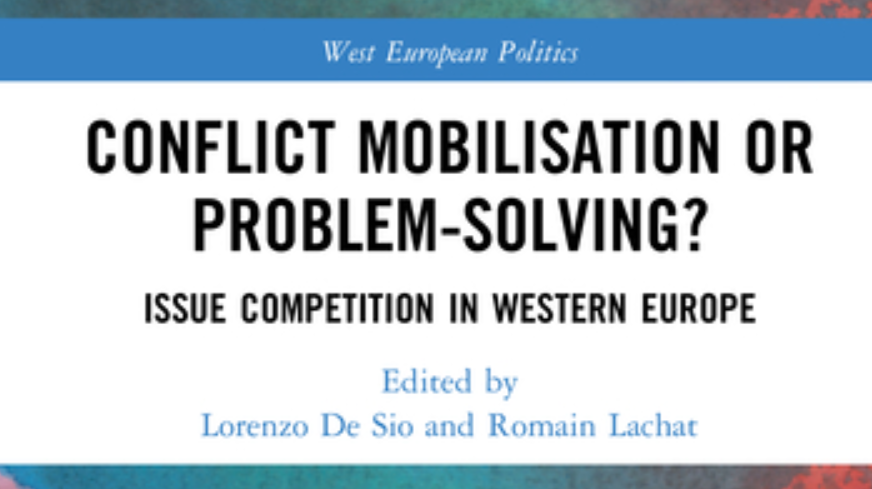 A new book edited by Lorenzo De Sio and Romain Lachat has been just published by Routledge; information is available here.

The book presents the results of the Issue Competition Comparative Project (ICCP) (data and documentation is openly accessible and available free of charge through the ICCP and GESIS websites), which analysed six elections in six important European countries (Austria, France, Germany, Italy, Netherlands, and UK) between 2017 and 2018 through a focus on post-ideological issue competition, leveraging a fresh theoretical perspective – and innovative data collection and analysis methods – emerging from issue yield theory.

The contributors to this volume cast a new light on electoral developments that have affected Western Europe in recent years, pointing to the key distinction between problem-solvers (parties and leaders that leverage their technocratic competence, and present a consensual, win-win view of contemporary transformations) and conflict mobilizers (that instead invest on the mobilization of conflict emerging from these transformations), as well as to the ability of some actors to mobilize voters across traditional ideological boundaries. In this light, parties commonly identified as “populist” simply emerge distinctively as cross-ideological conflict mobilizers; but mainstream parties appear vital and competitive as well, when they properly identify and leverage their issue advantages. Thus, the fate of democracy in Western Europe does not appear doomed to a triumph of populist appeals, but rather openly depending on the ability of political parties to leverage issue opportunities that emerge from societal demands and needs.

The chapters in this book were originally published as a special issue of West European Politics.