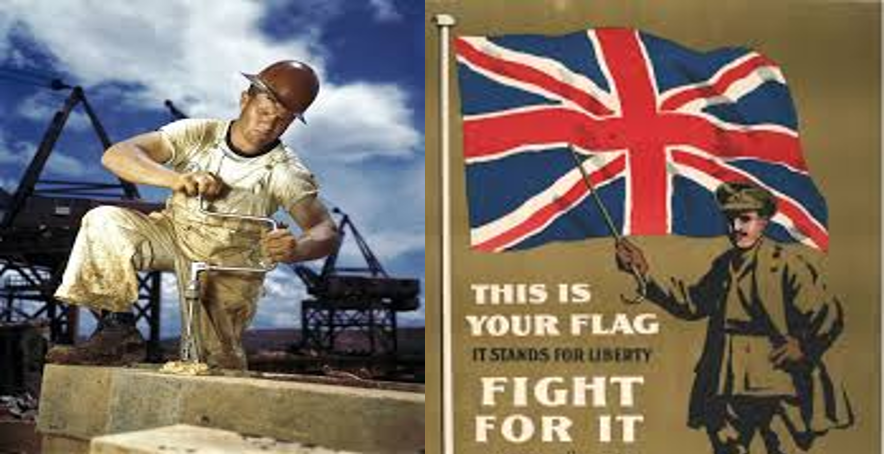 Building on the tools provided by issue yield theory (De Sio and Weber 2014), this analysis looks at the data collected by CISE through a CAWI survey launched a few weeks before the British general election. Similarly to what we have recently done before the Dutch parliamentary election last March and the French Presidential election last April, we rely on an innovative measurement of positional issues, which provides a common issue yield index for this type of issues. Positional issues are in general, defined by reference to two rival goals (e.g. progressive vs. traditional morality): the issue yield measure assesses the presence of related strategic issue opportunities for a party. The core dimensions originally developed (for positional issues) in the issue yield model are support (how much a policy is supported in the general public) and within-party agreement (how much it is supported within the party)[1]. The two dimensions correspond to the ideal goal of any party: the ability to keep their existing voter base intact, but with the possibility of reaching out to a much larger potential electorate. This goal is ideally achieved through an emphasis on the issues where the party is internally united, and perhaps many voters outside the party also agree.

Therefore, as regards the next British election, the issue yield index allows then us to answer the core question: what is – in electoral terms – the ideal agenda of each party? What selection of issues would provide the best electoral outcome to each party? The issue configuration is the most relevant, it shows the best opportunity (and the lowest risk) for each party; we can then compare it with the actual choice of issues that parties emphasized in their campaign, and thus evaluate how strategic was their campaign (which relates to our initial research question). This comparison will first be made in anecdotal terms, while we will address the question in quantitative terms (through the coding of candidate’s Twitter communication) in a few weeks.

The issue yield for all parties can explain why certain parties are (potentially) more successful than others. For the purposes of this analysis, we have focused on the seven main parties according to the opinion polls: Conservative Party, Labour Party, Liberal Democrats, United Kingdom Independence Party (UKIP), Scottish National Party (SNP), Greens, Plaid Cymru.

The following tables show issues (and related parties) according to the issue yield index, moving from highest to lowest values. Results show how parties could take advantage by competing on specific issues.

Table 1 shows the results of issue yields for parties on the right: UKIP and Conservatives. First, UKIP scores very high in agreement within its electorate, around 90%, on two migrant-related issues: “restricting access to welfare benefits for immigrants” and “banning the Islamic veil in public spaces”. In addition, the issue related to cultural xenophobia (“requiring foreigners in Britain to fully adapt to British culture”) shows a within-party agreement of 84%, similarly to anti-UE issues as “leaving the European Union” and “ending freedom of movement of people from the EU into Britain” (85%). All these issues show a very high issue yield between 0.90 and 0.84. A second element of the strategic issue opportunities of UKIP is that it can build an original package of issues with good electoral returns: hostility towards migrant and anti-Europe stances, but also economic redistribution (on the reduction of income differences and on the ban of zero hours contracts for worker its issue yield is 0.84 and 0.83, respectively).  This result is indeed very similar to what emerged also from the Dutch and the French surveys. Also in these two countries, PVV of Geert Wilders and Marine Le Pen faced a peculiar cross-cutting issue configuration that can be rewarding through an electoral strategy based on “cherry-picking” rather than on traditional left-right ideologies. On the one hand, UKIP is very competitive on ‘demarcationist’ issues (Kriesi at al., 2006) related to immigration and especially to the European Union; on the other, it is also competitive – to some extent – on traditional economic ‘leftist’ issues related to defence of social protection.

Regarding the Conservatives, similarly to UKIP, an anti-immigration issue (“restricting access to welfare benefits for immigrants”) provides a very high electoral return (0.82), but it ranks third and it is lower than the issue yield for UKIP on the same issue. Indeed, we have to stress that the issue yield for a party is not just an absolute value, but it should also be considered in relation to the issue yield of other parties. That is, we must look at the issue yield rank. In this regard, the other aforementioned anti-UE and anti-migration issues show high levels of within-party agreement (between 75% and 80%) and good issue yields (between 0.61 and 0.69), but the latter rank after UKIP’s issue yields. The same applies to the maintenance of Britain’s nuclear weapons (Trident). All this means that UKIP on such issues seems to be better positioned than Conservatives from a strategic standpoint. Nevertheless, party size should be taken into account, too: Conservatives can be still competitive because of the first-past-the-post electoral system, that is, voters with anti-immigrants and anti-UE attitudes might decide at the end to vote for them rather than for UKIP for strategic reasons. Finally, it is worth noting that no traditional economic liberal issue provides a good electoral return for Conservatives. Conversely (and surprisingly), an issue like “raising taxes and spending more on health and social services” shows an agreement within the party of  74% (and an issue yield of 0.60).

Table 1 – Traditional ideology or “cherry-picking”? The issue packages that characterize the electorate of each party (Conservatives, UKIP), and the electoral potential of these packages. 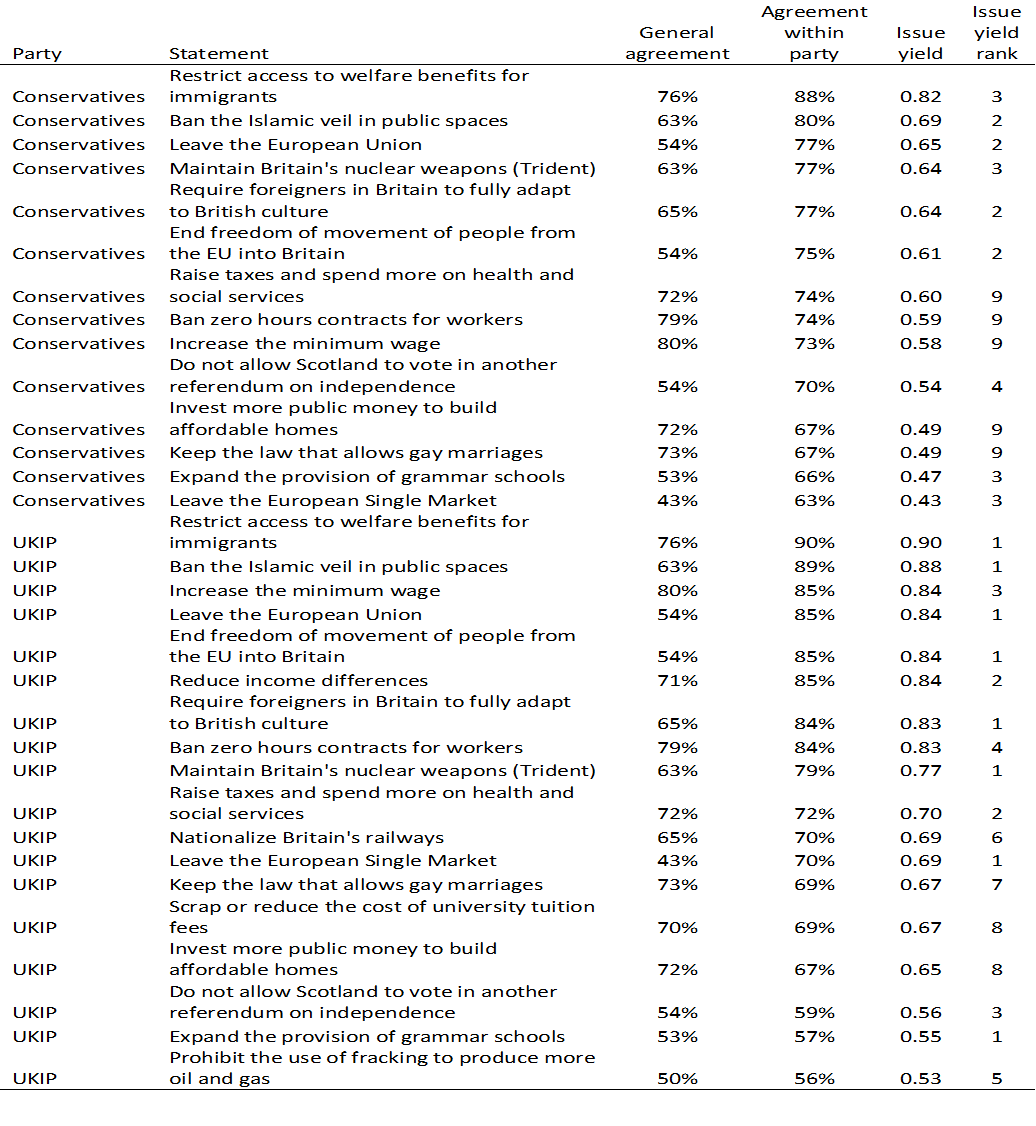 On such issues, Labour Party shows a much lower issue yield. Hence, it is reasonable from a strategic standpoint that Labour does not emphasize Brexit-related issues, focusing more on traditional left-wing issues on which it can have a good electoral return. Nevertheless, as we have seen, on left-wing economic issues it has to face a strong competition, with other parties (especially SNP and Plaid Cymru) ranking better than Labour in terms of issue yield. Again, Labour could overcome these difficulties appealing to a strategic vote because of the first-past-the-post electoral system.

Regarding welfare chauvinism, Plaid Cymru and Lib-Dem show high issue yields, being more similar to right-wing parties than to centre-left parties in this regard.

Finally, as predictable, SNP and Greens shows high issue yields on their core issues, that is, for SNP “allowing another Referendum for Scotland’s independence” (0.79, ranking first) and for Greens “prohibiting the use of fracking to produce more oil and gas” (0.67, ranking second). It is worth noting that on this environmental issue the SNP is better positioned than the Greens, with an issue yield of 0.69.

To sum up, the analysis of the strategic issue opportunity structure shows that Labour is competitive only on traditional economic left-wing issues, which are all issues that can provide a good electoral return to several parties, whereas the same pattern does not occur as regards right-wing economic issues.  In this regard, our data confirm the results of a previous article: in the United Kingdom, an economic left-wing orientation can be detected, with the only relevant exception of a largely supported welfare chauvinist goal. On anti-migration and anti-UE issues, Conservatives can get a good electoral return, competing on the same issues with the UKIP. The latter, nevertheless, has a much smaller size according to the polls; hence, Conservatives can be strategically rewarded by voters with anti-immigrants and anti-UE attitudes because of the first-past-the-post electoral system.

At this point, it emerges clearly the most interesting result: the two mainstream British parties of the left and of the right (i.e. Labour and Conservatives) do not show a strategic issue opportunity structure based on the same dimension of competition. Indeed, Labour can be competitive on the economic left-right dimension, whereas Conservatives can be competitive on the integration/demarcation dimension. In other words, Labour and Conservatives have to play in different playing fields. The electoral outcome depends on whether the Labour party will be able to exploit this favorable window of opportunity for an economic leftist agenda, or whether, instead, the Conservatives will be able to shift the public attention to “demarcationist” issues.

Finally, the SNP is very well positioned from a strategic point of view: it is competitive on progressive issues related to the economic left-right dimension, on social libertarian and environmental issues, on pro-Europe stances and on its core issue related to the Scotland’s independence. The latter point is, of course, also its weakness, being SNP rooted only in Scotland.

Table 2 – Traditional ideology or “cherry-picking”? The issue packages that characterize the electorate of each party (Labour, Liberal Democrats, SNP, Greens, Plaid Cymru) and the electoral potential of these packages.

[1] In the survey, respondents were asked to express their support on 15 positional issues. For positional issues, a first item requires respondents to choose over the two rival goals (it is a 6-point item, thus also allowing all techniques for classic positional items). Once the goal is selected (e.g. defending traditional morality), respondents are asked to mention (multiple choice) which parties they consider credible to achieve that goal.