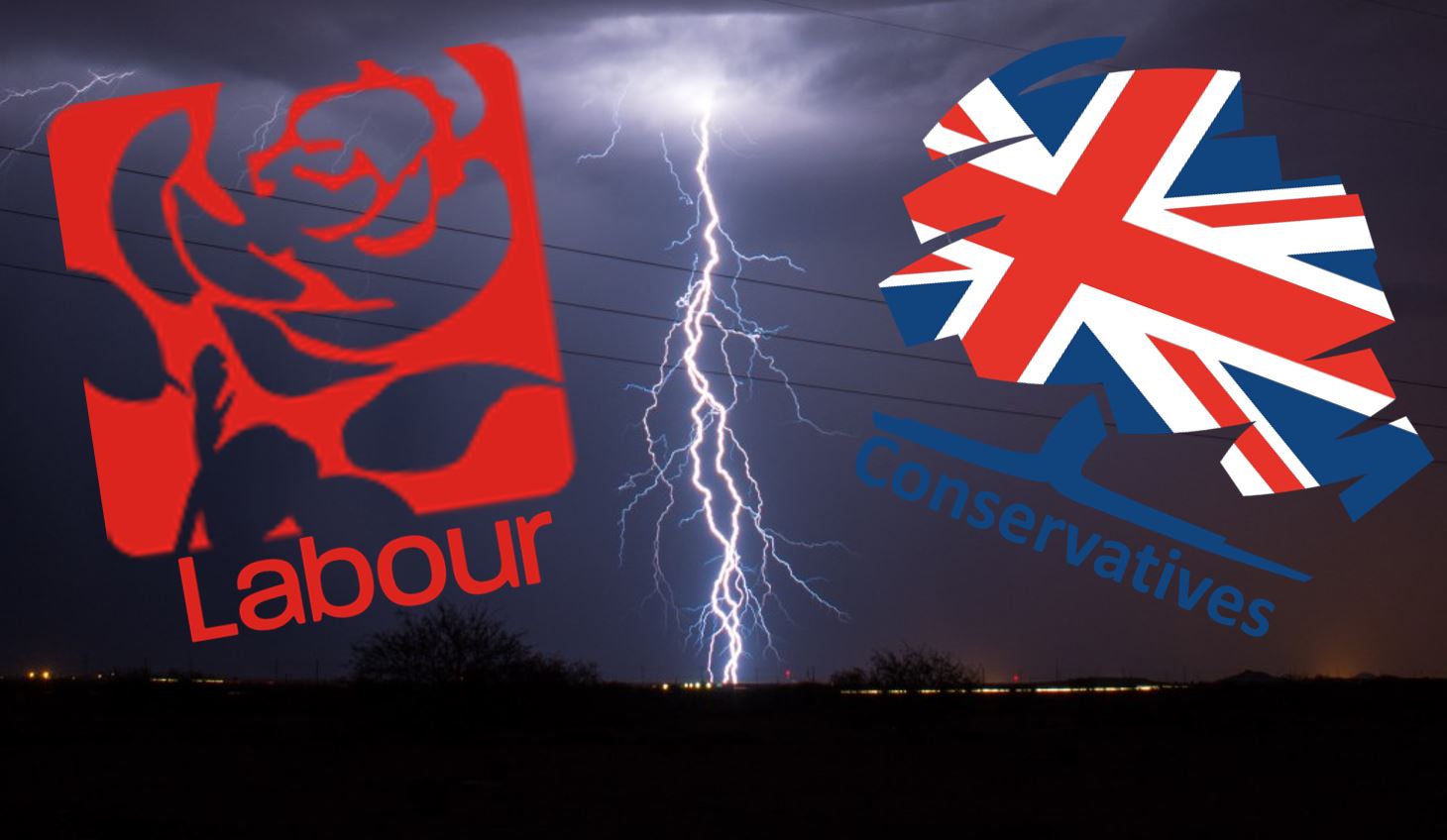 In our assessment of the current state of the British public debate based on the original data collected by the CISE as part of the comparative ICCP project, we have seen that among British voters have a great deal of interest in shared goals, although divisive economic policies are quite relevant as well, with the traditional left-wing positions having the upper hand.

Here we look at political parties. Basically, what we have already seen in both France and the Netherlands is that two different party strategies emerge. On the one hand, they can present a consensual face, omitting conflicts and campaigning on their credibility to solve common problems. This is the strategy recently adopted by both Macron and Rutte, and, more in general, by mainstream parties. On the other hand, a second strategy consists in emphasizing contemporary conflicts (such as the one emerging between winners and losers of globalization), choosing sides, and vigorously campaigning on them. This is the strategy used by Le Pen in France and Wilders in the Netherlands. Challenger, anti-establishment parties tend to choose this campaign strategy.

Turning now to the British case, the hypothesis we want to test is whether also in Britain mainstream parties have the most favorable campaign issues on shared goals and valence issues, on which their competence in solving problems can most be rewarded, while on the contrary challenger parties have more favorable prospects on divisive goals, those emerging on one of the two rival sides of conflictual, positional issues.

To verify whether this is the case, we report Table 1, which shows the most credible four parties on the different (shared or divisive) goals. The table also shows the fractions of the electorate deeming the various parties credible in achieving that specific goal, along with their level of support and priority.

We can clearly see that, with respect to shared goals (those having by definition 100% support, reported on the top of the table) the two mainstream parties are clearly the most credible. Out of the ten overall shared goals Tories and Labour are ranked as the two most credible parties on eight of them – the eight having the highest level of priority, by the way. Only on controlling immigration the UKIP is (slightly) more credible than the Labour, which ranks third; and on protecting the environment the Greens are (by far) more credible than both Labour and Tories, basically tied in second place.

Before, moving to the analysis of divisive goals, we need to underline the clear advantage emerging for the Conservative Party on valence issues. It is considered the most credible party in achieving seven out of the ten related shared goals, six over the seven with the highest priority, including law and order goals, economic goals, and even some welfare-related goals (such as school quality).  Furthermore, Tories enjoy an average credibility gap of 14 points from the second-most credible party; the gap is often even larger than that – for instance, it is 25 points on the most salient issues (protecting from terrorism). Only on improving the quality of schools and reducing unemployment Conservatives are virtually tied with the Labour; still, though, they rank first. The Labour is the most credible party only on protecting the pensions and the NHS, with a margin on the Tories that in both cases is a little above 10 points. The latter issue is particularly important, as is it almost as salient as terrorism among UK voters.

The pattern of higher credibility on valence, shared goals for mainstream parties is then clear in the UK as well. However, if we scroll down the table and look at divisive goals, we find a striking fact: mainstream parties are again the most credible. Focusing first on the 18 majority goals (those being indicated as preferred over their opposites by a majority of the electorate), we find that Labour is considered the most credible party 9 times, while Tories 8. Only on banning the Islamic veil from public spaces, supported by 63% of UK voters but with a quite low priority, the UKIP is the most credible party – and with a small margin on the Conservatives.

The Labour appears as a classic social-democratic party (job-market regulation, welfare, redistribution) with a pinch of civil rights (gay marriages). It needs to be stressed how all these goals are preferred by significant majorities of the electorate; among them, the nationalization of the railways, indicated by two third of the respondents. On the other hand, the Conservative Party is able to capture voters’ credibility on demarcation issues: leaving the EU and Schengen (supported by 54% of the electorate), not allowing Scotland a second referendum of leaving the UK (again 54%), welfare chauvinism (76%), immigrants assimilation (65%).

Even if we look at minority goals, those selected by a smaller fraction than the one preferring its opposite, the picture does not change. The issue yield theory (De Sio and Weber, 2014) suggests that small parties might cultivate their areas of issue ownership on such goals. This is exactly what we found in both France and the Netherlands. But this is not the case in the UK. Here the two mainstream parties are the most credible on these goals as well. The Labour Party is the most credible on seven goals, including all the integration ones, which are less supported than the demarcation ones – on which, as we have seen above, the Tories are the most credible. On the contrary, Tories are the most credible in achieving nine minority goals, including all the laissez-faire goals on economic matters, which are currently less popular than their opposites in the UK. Only the Greens appear as the most credible party on prohibiting fracking (which is actually supported by 49,6% of the electorate), although the Labour credibility is quite similar. Finally, the SNP is the most credible in allowing a new Independence referendum in the Northern British region.

As a final confirmation of the high credibility of mainstream parties on rival goals, let us provide an additional piece of evidence. As we have mentioned, out of the 36 rival goals, both Labour and Tories are the most credible 33 times. If we look at the second-most credible party, the two big parties occupy this place on 27 instances. The UKIP is more credible than the Labour on 5 demarcation goals, and the LibDems are more credible than the Tories on 3 integration ones – which is also the case for the Greens as to dismantling nuclear weapons. 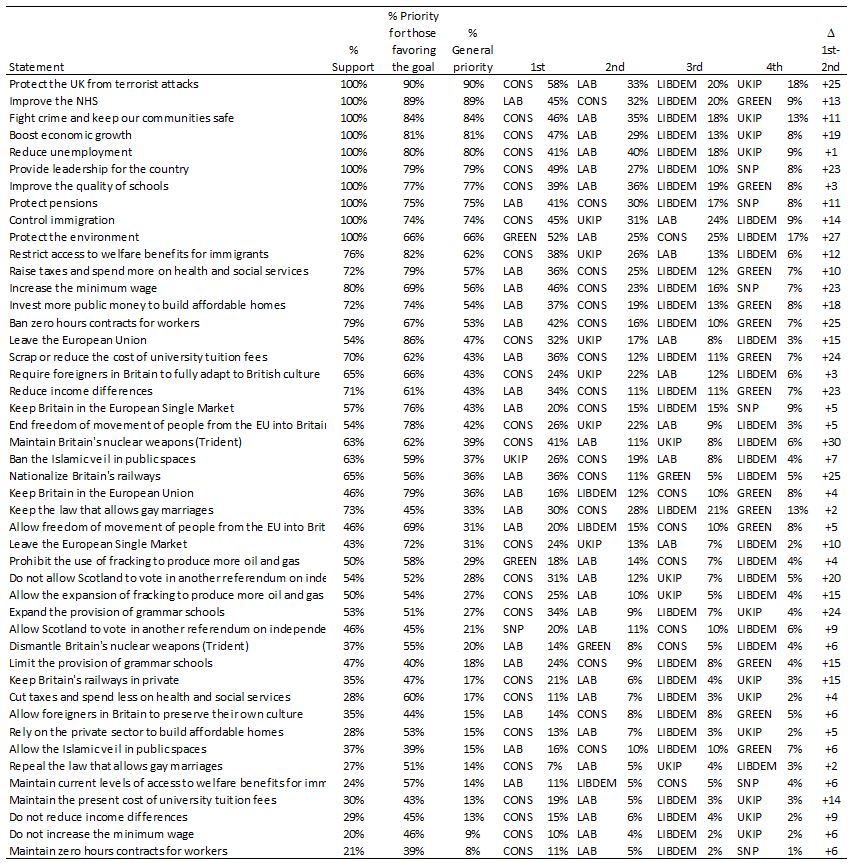 From our investigation, the UK emerges as profoundly different from the cases we have previously analyzed in this comparative project. In both France and the Netherlands mainstream parties suffered from the challenges both on the left and on the right. On the right, the demarcation issues rewarded populist right-wing parties (FN and PVV) at the expense of the mainstream options (Republicans and VVD, CDA). On the left, national representatives of the PES were not the most credible on classic economic left goals (as reducing income differences), on which they were beaten by less moderate actors (France Insoumise and SP). In the UK, on the contrary, Labour and Tories maintain their credibility in achieving divisive goals, as well as the shared ones.

Our findings indicate that the two traditional UK parties have coped with the challenges of contemporary transformations better than their continental counterparts, being able to successfully integrate (or reintegrate) in their platforms goals emerging as a consequence of those transformation – anxiety towards immigrants and foreigners on the one hand, and desire for redistribution and economic protection on the other. Basically, both Labour and Tories have embraced current conflicts, rather than denying them. The Labour appears as a classic social-democratic party from the Seventies (welfare, redistribution, even nationalizations), which has added integration and civil rights: it wins on the economy but loses on integration. The Tories are a classic Anglo-Saxon right-wing party on the economy (free market, free market, free market) which has embedded demarcation to its platform. It loses on the economy, but wins on the second dimension (Kriesi et al., 2006) – and it is much more credible on shared goals.