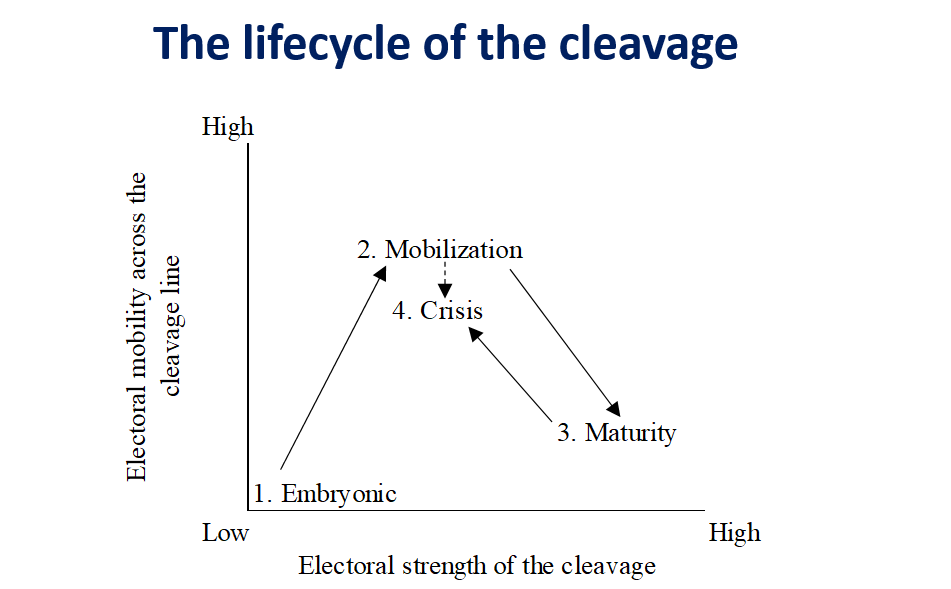 Over recent years, a new transnational conflict has been deemed to be structuring political conflict in Europe. Several scholars have posited the emergence of a new ‘demarcation’ vs. ‘integration’ cleavage, pitting the ‘losers’ and ‘winners’ of globalization against each other. This new conflict is allegedly structured along economic (free trade and globalization), cultural (immigration and multiculturalism), and institutional [European Union (EU) integration] dimensions. From an empirical viewpoint, it is still a matter of discussion whether this conflict can be interpreted as a new cleavage, which could replace or complement the traditional ones. In this context, the European Parliament (EP) elections of 2019 represent an ideal case for investigating how far this new cleavage has evolved towards structuring political competition in European party systems. In this paper, by relying on an original dataset and an innovative theoretical and empirical framework based on the study of a cleavage’s lifecycle, we test whether a demarcation cleavage is structuring the European political systems. Moreover, we assess the evolution of this cleavage across the 28 EU countries since 1979 and the role it plays within each party system. The paper finds that the demarcation cleavage has emerged in most European countries, mobilizing over time a growing number of voters. In particular, this long-term trend has reached its highest peak in the 2019 EP election. However, although the cleavage has become an important (if not the main) dimension of electoral competition in many countries, it has not reached maturity yet.