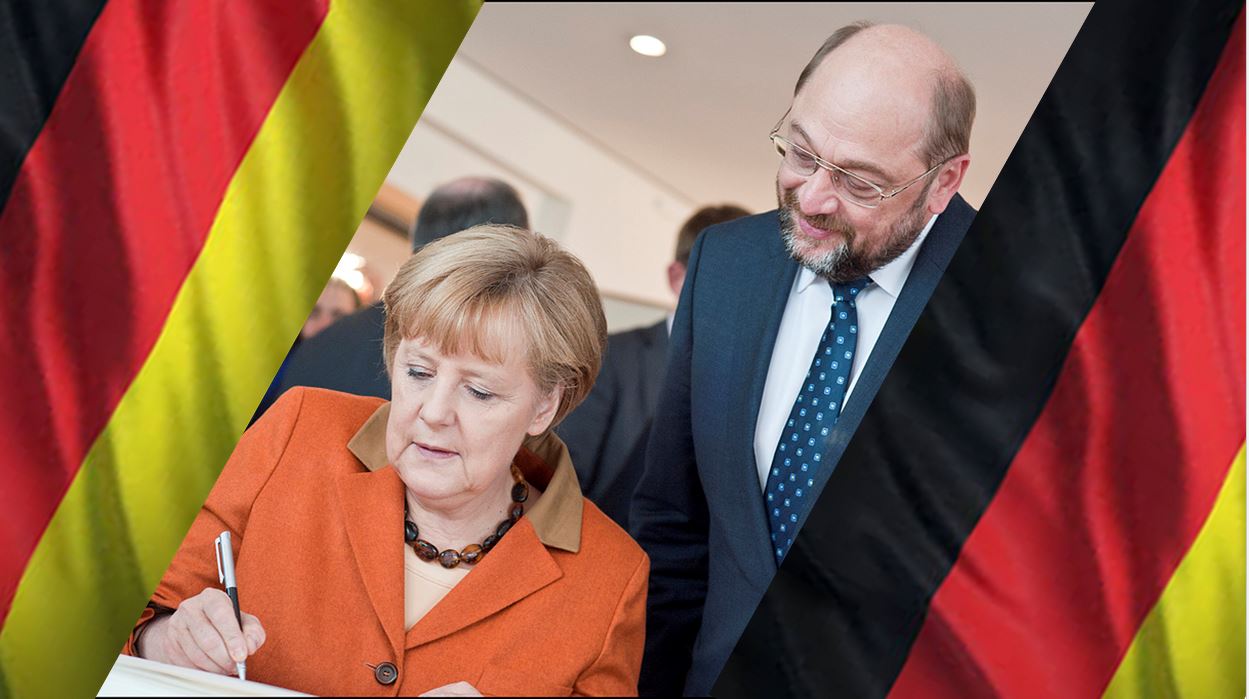 Next Sunday German voters are called to the polls to elect the new members of the Bundestag. It will be the fourth legislative elections in an important UE country this year, following the Netherlands, France, and the United Kingdom. Unlike in the aforementioned cases, in Germany the electoral outcome appears to be quite certain. According to recent opinion polls, the CDU-CSU (the party led by Chancellor Merkel) should receive roughly 36% of votes, a 5-point decrease compared to the extraordinary result achieved in 2013. The SPD, led by Mr. Schultz, should get a little over 20%. Not enough to challenge Mrs. Merkel’s fourth term. However, although the winner of elections is not in uncertain, a completely different story concerns the governmental arrangement that will emerge as a consequence of the elections. The German law provides for a proportional representation, which makes it impossible for Merkel to get the majority of the MPs. She will have to form a coalition government. The elections will be crucial in defining the set of possible winning coalitions. Will there be a feasible alternative to the experienced Grand Coalition formula? In addition to the two major parties, a record of four parties should be able to meet the 5% national threshold and get seats in the Bundestag: the Linke (radical left), the FDP (liberal), the Greens, and the AfD (populist right). For the first time, then, there will be six parties in the Budestag: a scenario which should provide possible alternative coalitional paths to Mrs. Merkel.

To assess the preferences and priorities of German voters, as well as the campaign opportunity structure on issues for different parties, the CISE (Italian Center for Electoral Studies) has conducted a CAWI survey on the adult German population in the context of a broader comparative research project. Similarly to what we have recently done for the Dutch, the French, and the British elections, respondents in Germany were asked to express their support on a wide set of positional issues (divisive issues that refer to two rival goals, e.g. public spending vs. tax cuts). Specifically, each respondent was asked to position himself/herself on a 6-point scale where the points 1 and 6 represent the two rival goals to be pursued on a given issue. Later, respondents were asked to indicate the priority they assign to the selected goal for each of these issues. The questionnaire also included 10 valence issues (Stokes 1963), namely issues that refer to one shared goal, over which a general agreement is assumed (e.g., protection from terrorism). On these issues, a support of 100% is set by design and respondents were only asked to attribute the level of priority. The selection of both positional and valence issues was made in cooperation with a team of German researchers.

Table 1 summarizes the main findings from the survey, reporting, for each issue, the relative level of priority among the overall German electorate, the nature of the issue (whether valence or positional), and its policy dimensions (economic v. cultural). In the fourth and fifth columns, for positional issues, we report the side, the goal which received the highest support (between the two rival ones), and the magnitude of such support. In the far-right column we indicate the party with the highest generalized issue yield score on that issue. This is an index based on issue yield theory (De Sio and Weber 2014), explicitly designed to be fruitfully employed for both valence and positional issues, indicating the favorability for the party of campaigning on that issue.

Tab. 1 – Issues and goals in Germany by priority and support (click to enlarge)

Starting from priority, we observe that, as in the other countries included in our investigation, the most salient issues are valence. In fact, all five issues with the highest priority are valence. Among them, fighting poverty for elderly and terrorism stand out (85% priority), although the latter is here slightly less salient than in France (91%) and the UK (90%). Compared to these two countries, Germany has so far suffered fewer terrorist attacks, just as the Dutch case, in which prority for the fight to terrorism was at 85%. This may be part of the reason why in Germany respondents’ priorities are more spread on a variety of issues, including economic ones – such as providing affordable homes and fighting unemployment. It is surprising, however, that economic growth, an issue which emerged as crucial in the other countries, is indicated as a priority by less than two thirds of German respondents (64%) – particularly low compared to the priority observed in the UK (81%), France (80%), and the Netherlands (79%).

The only divisive issues showing a high priority are those related to the EU and immigration, which are considered a priority by three quarters of respondents. More in general, looking at the third column of the table, among positional issues those belonging to the cultural dimension (EU, immigration, but also nuclear energy) appear to be more salient. The only salient economic issue concerns the choice over the current budget surplus, whether it should be used to cut taxes or to improve services. Finally, civil and social right issues (gay marriages, gender quotas, referenda) appear to have a low priority with the Germans, along with some environmental issues – such as wind turbines and the ban on diesel cars.

Moving now to the central section of the table, we are able to assess the preferences of German voters on positional issues. Specifically, beyond the priority assigned to the overall policy issue, we can verify which of the two relative rival goals is preferred, and by how much. In other words, we are able to appreciate where German voters stand on the various positional issues. The first element which clearly emerges is the presence of a significant number of issues on which one side is preferred by an overwhelming majority. In particular, seven goals have been indicated by more than 75% of the sample, which makes them “quasi-valence” issues. This is something unexperienced in the previously analyzed countries, where the number of so-supported positional goals was much lower – 2 in the Netherlands, 3 in the UK; a little higher, but still lower than in Germany, in France (5). In Germany, then, more than in the other countries, it is appropriate to speak about a “German agenda” shared by the overwhelming majority of the electorate. Another piece of evidence to support this claim: among the 17 tested positional issues, only on 5 of them we observe the less supported rival goal being supported by more than 30% of the sample.

The scenario we have just outlined appears particularly favorable to the formation of a post-electoral coalition including different parties. What should be the political platform? From our data a surprising mix emerges, once again indicating that the Zeitgeist of this season is hardly understandable in the terms of the classical analytical dimensions crucial for 20th century politics. The German electorate seems to prefer a combination of economic protection, closure to immigrants, and staying in the EU. In other words, we note a peculiar combination of an economic left agenda (raising minimum wage, not increasing pension age, not deregulate the job market, and reducing income difference just below the 75% support threshold), with the demarcationist position on the cultural dimension (Kriesi et al. 2006) – making immigration rules more restrictive, limit the number of refugees, requiring foreigners to adapt to German culture. A picture pretty similar to the other countries, with a crucial difference, which makes the German case unique. While in France and in the Netherlands staying in the EU was a deeply divisive issue, supported in both case by 62% of respondents (and even more so in the UK where only a minority supported it), in Germany more than four respondents out of five want to stay in the EU. The cultural objection to immigrants does not translate in Euro-skeptical position, thus breaking the demarcation-integration dimension. This is an extremely interesting finding, which proves that the schemes developed so far to study politics and its conflicts have become basically unable to represent the characteristics of political competition of our time.

Among the (few) issues on which the German electorate is actually divided, we only find a single item with a high priority. This is the issue regarding the destination of the budget surplus, which 58% of respondents want to allocate to improve infrastructures and education – coherently with the general tendency of prevalence for left-wing economic goals. The remaining issues on which the two rival goals are supported by similar portion of the sample show a very low saliency: as such, they should be disregarded in strategic terms by parties intending to agree on a shared governmental policy platform.

Finally, let’s have a look at the right column in Table 1, indicating the party with the highest generalized issue yield score on that issue. In other words, that is the party which should emphasize the issue most than any other during the electoral campaign to maximize its votes. It is not surprising that, on valence issues, the two mainstream parties (CDU-CSU and SPD) have the best yields: this is actually in line with the other countries in which we have conducted the study. The Chancellor’s party is in the best position on fighting terrorism, crime, supporting economic growth, infrastructures; social-democrats have the edge on shared goals concerning social justice, unemployment, poverty, housing, and family and children. The only exception to the mainstream prevalence on valence issues is represented by the protection of the environment, on which (unsurprisingly) the Greens have the highest issue yield. Among positional goals a more relevant variation emerges. The CDU-CSU is the most apt party to emphasize its Europhilia, even more than the SPD which is led by the former President of the EU Parliament. On the second salient divisive issue (immigration), the right-wing populist party named Alternative for Germany (AfD) has the competitive advantage. It shows the highest yield on three items related to this domain – making immigration rules more restrictive, limit refugees, and requiring foreigners to culturally adapt. Looking at remaining parties, the Greens emerge as the party in the best position to talk about environment and social rights (nuclear energy, wind turbines, gay marriages and gender quotas); the Linke is the strongest party on redistribution issues (income inequality and pensions), but also on referenda; while the liberals of the FDP have the highest yield on no issue: whatever the decide to speak about, they favor some other party more than they help themselves.